Two defeats have not made India a bad team overnight, opener Rohit Sharma said after firing the 2007 champions to their first victory at the Twenty20 World Cup.

The pre-tournament favourites are at high risk of an early exit following defeats by Pakistan and New Zealand in the Super 12 stage of the tournament. 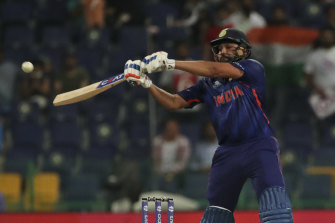 Rohit Sharma hits a boundary in a powerful innings against Afghanistan.Credit:AP

They snapped their losing streak with a 66-run victory over Afghanistan on Thursday (AEDT). They must win their last two games in group two and hope other results go their way to make the semi-finals. India’s batting finally clicked against Afghanistan, as they racked up the tournament’s highest total of 210-2 and restricted their opponents to 144-7.

“We are a very good team. It’s just that we were not good on that particular day against Pakistan and New Zealand,” said Rohit, whose 74 off 47 balls earned him the man-of-the-match award.

“The game we played today pretty much sums it up, that this is the kind of team we are. When we play fearlessly, this is what we get. We have been consistently playing quality cricket. One or two bad games do not make us bad overnight.”

Group leaders Pakistan have qualified for the semi-finals and India hope to join them by winning their matches against Scotland and Namibia handsomely and relying on Afghanistan to beat New Zealand.

Rohit said India would go for the jugular.

“We know that if we lose any game from here on now, we are out of the tournament,” he said. “When you are in that kind of situation you have to play fearlessly, not think too much about what’s happening, or what’s happening elsewhere.”

India play Scotland in their next match on Friday.

In the day’s other group game, Martin Guptill smashed seven sixes but missed out on a century as New Zealand secured a 16-run victory over Scotland.

Guptill made 93 runs off 56 balls in the Black Caps’ total of 172-5 in sweltering heat and humidity after fit-again Scotland captain Kyle Coetzer won the toss and chose to field.

In reply, Scotland finished on 156-5 for a third straight group two defeat. Matthew Cross (27) hit five boundaries in one over against Adam Milne in the batting power play and Michael Leask scored a brisk 42 not out off 20 balls.

Guptill became only the second batter to reach 3000 runs in T20 internationals after India’s Virat Kohli (3225) when he flicked Alasdair Evans to fine leg for a six early in his knock.