He might have had a slight name tweak to race in Australia, but Australian Bloodstock’s Jamie Lovett believes Top Ranked will show his quality in The Hunter at Newcastle on Saturday.

The import raced as Top Rank in Europe and was competitive against the best milers there, including a third to Palace Pier in the Lockinge Stakes at group 1 level, but makes his Australian debut at 1300m. 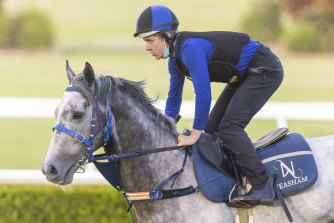 Top Ranked is ready for an Australian debut in The Hunter. Credit:Getty

“That is the only doubt with him, it might be a bit short of his best trip,” Lovett said. “He was a very good miler over there and the question is will he be sharp enough against our horses.

“We are confident he is going to shape against the better horses next year but he has been good since getting here and it is a good chance for him to have a run and see where he sits.”

The Hunter is Newcastle’s $1 million showcase in the spring and it has provided heartache for Lovett in its short history.

“Being in Newcastle, it’s a race will would like to win and we have finished second in it for the first two years, which is frustrating,” Lovett said.

“He is probably the best horse we have in the race on Saturday, but Kris [Lees] has Gem Song, Special Reward and Wandabaa and they are capable of being in the finish and they have been prepared for this race.”

Top Ranked is a $4.50 chance and will get a taste of the top of Australian sprint ranks with Lost And Running, which was fourth in The Everest and runner-up in the Classique Legend Stakes, the $3 favourite.

Trainer Annabel Neasham has been impressed by Top Rank in the month she has had him and is talking about the Doncaster and the Queen Elizabeth Stakes with him in 2022.

He looked to have a bit toe, winning a jumpout before leaving the Canterbury quarantine centre last month, but Neasham is cautious about his chances.

“Hopefully that’s good enough to be in front. He looks a horse that can race on speed and has a good turn of foot.

“It’s a little bit of unknown territory dropping back in trip but he hasn’t run for four months and he seems to have freshened up well.

“Provided he adapts he’s going to be an exciting horse I think.”

There appears to be plenty of speed in The Hunter with Prime Candidate the likely leader after returning from Melbourne. Bjorn Baker said he is confident his seven-year-old will once again keep the favourites honest.

“He has been running in these races for a year now and he just doesn’t let you down,” Baker said. “With this sort of money around, when you have a horse like Prime Candidate, you just have to keep showing because his turn will come.

“He is drawn perfectly in barrier three, so he should be able to get pretty close to the front, and you know he will try his heart out.”