Shane Warne’s cricket feats often were improbable. The unfolding of the first Boxing Day played since he died and in front of the stand re-named in his memory was another kind of tall tale.

Cameron Green, all 198 centimetres of him, blasted through South Africa’s lower order to take 5-27, his first Test bag of five. South Africa’s only successful resistance in their innings of 189 was led by 206cm Marco Jansen, who batted with aplomb for a maiden Test half-century. 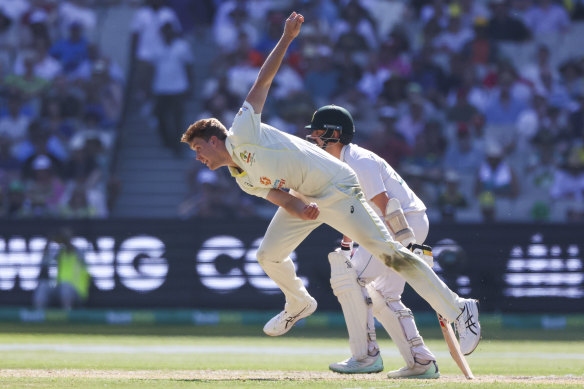 Cameron Green sends down another thunderbolt at the MCG.Credit:AP Photo

At this point, we must also acknowledge Kyle Verreynne, who also made a half-century and shared with Jansen the only significant stand of South Africa’s innings, replicating his one-out doggedness in the first Test in Brisbane. Inconveniently, Verreynne is only 175cm, so let’s just say he stands tall.

A crowd of nearly 65,000 also found advantage in height. On a proper summer’s day at last, many were able to retreat from the sun’s direct glare on the lower levels into the roomy and well-ventilated shadows of the eaves on level four.

It’s a blessed ground where fans, if they like, can have their day in the sun in the shade. That, and 10 South African wickets kept them all in agreeable humour.

Otherwise, Boxing Day was for soothing hangovers and exploding myths. One is that Scott Boland is unplayable on MCG. This day, he was merely very good. He started the party with an early wicket. 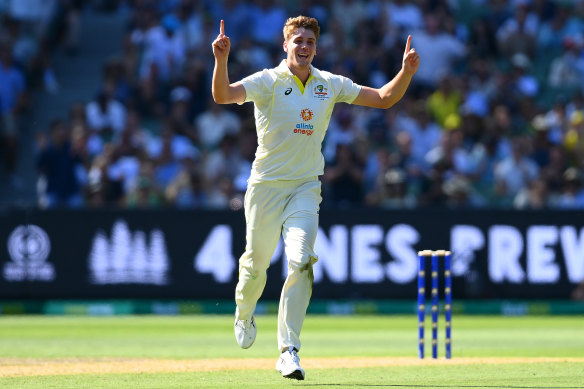 Cameron Green celebrates one of his five wickets on Boxing Day.Credit:Getty Images

Another is that the MCG pitch is either lion or lamb, but nothing in between. The MCC are still smarting about match referee David Boon’s below average rating for last year’s Ashes pitch, but trimmed the grass this year by three millimetres.

The outcome was a deck with pace and carry for quick bowlers that was also true enough for batsmen to time their shots when they could play them. It looks good for three days at least, a kind of first base.

A third myth is that money always goes to man’s head. Pre-match, Green landed himself a $3.15million Indian Premier League deal, the richest yet for an Australian player. This day, to the extent that Test cricket is relevant to T20, he substantiated that price.

Another myth is that tall men cannot bat, which brings us back to Green and Jansen. Both still relatively new to Test cricket, they occupy complementary positions in their respective teams. Green was picked to bat, but this summer has had few chances at No.6 and not many to bowl and pre-match said he felt a bit like a spare part.

But he first came to notice as a fast bowler – captain Pat Cummins recalls hearing about this tearaway from Perth who when he paid attention to him saw a man who kept making hundreds. 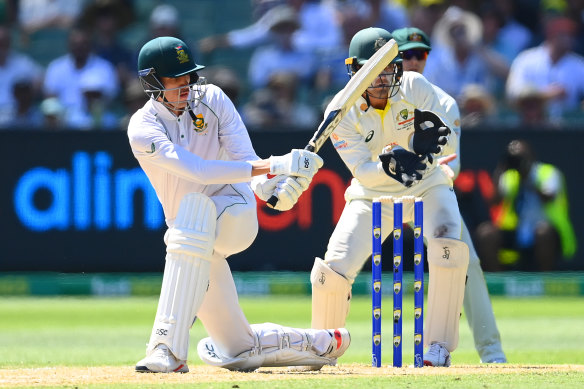 Marco Jansen sweeps Nathan Lyon for a four at the MCG.Credit:Getty Images

As usual, Green was the fifth bowler used this day, but a minor injury to Mitch Starc in mid-afternoon opened up a chance for a longer spell and that was all he needed to turn one early wicket into five. The two most telling were the Verreynne and Jansen, three balls apart, each to balls liable to leave any batsman in two minds with no time to change it. Both chose wrongly.

Jansen is picked to bowl, and no wonder: a 140km/h left-armer would be an asset to any team. But South Africa, knowing too well their top order frailty, think of him at No.7 as the last of their batsmen rather than the first of their bowlers.

This day, he validated it. Two flourishing on-drives for four from Starc announced him as an authentic batsman, a pair of boundaries from spinner Nathan Lyon soon afterwards, one lofted and straight, one swept, acted as second reference.

As per lanky legend, he sometimes was awkward against short bowling, but only once looked helpless against it, when hooking Cummins into a trap that he and everyone else at the ground could see in the over before lunch. Fortunately for him, Usman Khawaja dropped the catch. 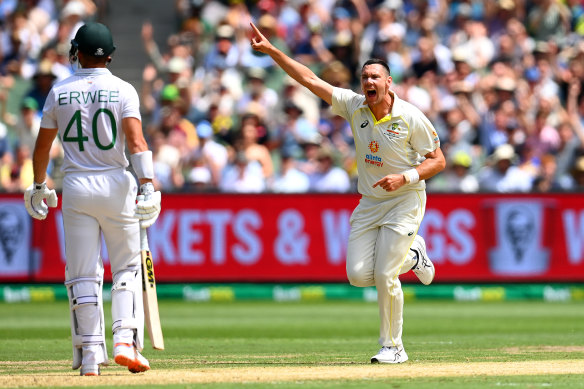 Scott Boland gets an early wicket at the MCG.Credit:Getty Images

If anything, Australia spared Jansen the rod. Could it be that under Cummins’ captaincy, Australia now are too nice?

In any case, here was the first part of the day in miniature. Both sides earned and squandered positions. Australia, choosing to field first, bowled smartly, but dropped catches. South Africa’s top order batsmen, led by captain Dean Elgar, was admirably gritty, but gave half-chances that Australia – to wit, Marnus Labuschagne – took.

Verreynne and Jansen rebalanced the innings with an ever more assured stand of 112 for the sixth wicket. Their accomplishment may be judged by the fact that the end of their partnership came as a surprise. It came not long after a pause at 3.50 pm when all players and fans applauded Warne, Australia’s Test cap No 350. Could it be that he is still exercising his superpowers from beyond the grave?

More prosaically, it was simply that Australia stuck to their task. Though latter-day Test cricket sometimes appears to be stuck on fast-forward, it is still first of all a waiting game. 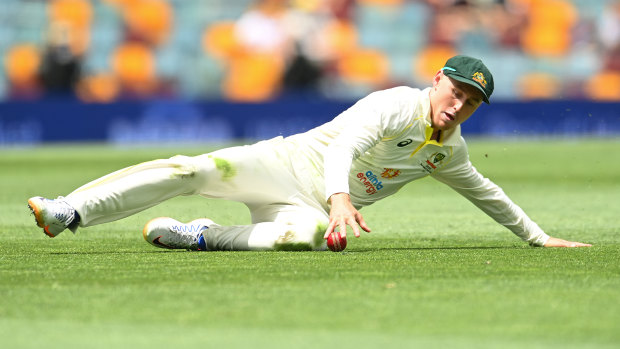 Marnus Labuschagne was brilliant in the field.Credit:Getty Images

As in Brisbane, South Africa got plenty for one wicket, a negligible sum for the rest. In Brisbane, it was 98 for the fifth wicket, 54 for the other nine. Here it was 112 for the sixth wicket, 72 otherwise. It makes it hard to see how they can win or even draw this series.

Usman Khawaja was a casualty for Australia, but David Warner’s belligerence acted as a slingshot into day two.