A thrilling four-way finish in the Cantala Stakes saw the Danny O’Brien trained Superstorm poke his nose in front on the line to edge out Ice Bath, Cascadian and Mr Brightside and record his first group 1 win.

Damien Oliver rode the perfect race to take out his second group 1 win on Derby Day, both over 1600 metres, after steering Colette home in the Empire Rose Stakes. 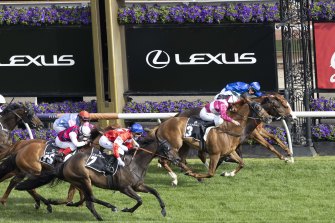 Superstorm (the No.3 saddle cloth) got up in a tight finish.Credit:Getty Images

Superstorm has promised to win a group 1 race having finished third in the Toorak Handicap and the Underwood Stakes in this preparation, but he was not to be denied after Doncaster Handicap winner Cascadian looked to steal a winning break at the 100 metres mark when in-form jockey James McDonald poked through on the rails to hit the lead.

However runners came from everywhere to challenge the seven-year-old Cascadian who was brave to finish third in the end behind the consistent Ice Bath who ran well from the outside barrier to just miss in the photo finish with Superstorm.

O’Brien revealed they considered running the horse in the Cox Plate but opted for the mile.

“He’s raced at top class throughout his career. He won the Feehan, placed in the Underwood and the Toorak so it’s great to knock off a big one with him,” O’Brien said. 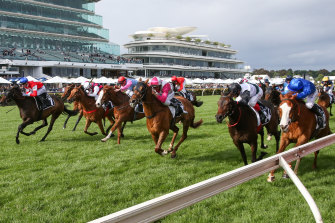 The packed finish at Flemington.Credit:Getty Images

It was the second time Oliver had won the race having being victorious on Happy Trails back in 2012 with the 49-year-old still at the top of his game.

“It was nice to get a narrow victory. There were horses everywhere, typical of a big mile handicap. I was getting a good run through and then I just had to switch off ones heels suddenly when it straightened. Fortunately it didn’t cost him any momentum and he stuck his head out on the line.”

O’Brien said Oliver was in superb form and played a big part in landing the win.

“His two Group 1 wins today have been as good as you’ll ever see,” O’Brien said. “He’s no spring chicken and he’s still riding as well as he’s ever done.”

It was the first time Mr Brightside had been defeated since July however the rising four-year-old lost no fans as she just fell short of victory following six straight wins.

His jockey Craig Williams was happy with Mr Brightside’s run with the gap between fourth and first a neck.

Godolphin mare Colette collected the $1 million bonus on offer for the winner of the Empire Rose Stakes after qualifying for the bounty when she won the Tristarc Stakes at Caulfield a fortnight ago.

It was the second group one win for the Godolphin five-year-old who benefited from a vintage Oliver ride to sneak up through horses and defeat the popular Tasmanian Mystic Journey, who appeared to have the race won when she loomed at the 200-metre mark. 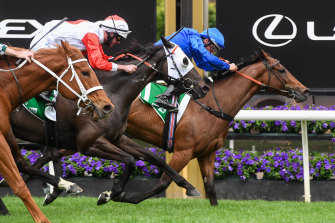 “That’s just about the ride of the season for mine, Damien Oliver on Colette there. She’s a proper racehorse, isn’t she,” Cummings said.

“She got herself back together when it didn’t all work out for her after the Caulfield Cup and the guys had her in great shape a fortnight ago for the Tristarc.

“She had ‘follow me over a mile’ written all over her and a good track was no problem for her today and she weaved through them beautifully. Let down like a serious group one horse and I think she deserves all the accolades she gets.”

Colette’s victory came 12 months after the mare won the Golden Eagle at Rosehill on the same weekend last year.

The win was also Colette’s second group one victory as she won the AJC Oaks as a three-year-old, with the five-year doing her best work at the end of the 1600m at Flemington.

She was the first horse to win the Tristarc Stakes-Empire Rose double since champion mare Typhoon Tracy in 2009, with Cummings considering backing Colette up in the Mackinnon Stakes.

“She’s a little darling, there is not much of her, but she has a tonne of heart, and it was a great win,” Oliver said. 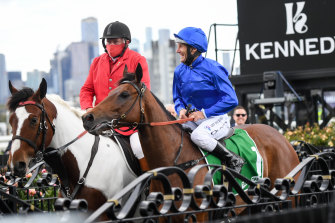 Mystic Journey once again performed well at Flemington, the All-Star Mile winner only missing a place once in seven starts at headquarters, with Luke Nolen happy with her effort. Chris Waller’s Hungry Heart was a strong third.

The favourite Tofane settled fourth in running but was outsprinted.

Earlier, Godolphin filly Willowy stamped herself as the horse to beat in Thursday’s VRC Oaks, chasing down Daisies to win the Wakeful Stakes. But Cummings said the team would keep a close eye on her before definitely pressing towards the 2500m classic.

“It is an important conversation for us to have, but if she pulls up absolutely bouncy, then it is a consideration to back her up on Thursday,” he said.

“That was a nice gallop for her this afternoon, and she’s got the rising stayer look all over her and a very promising filly.