Semi-final hero Marcus Stoinis has spoken about the tension and chaos of his dramatic partnership with Matthew Wade which has propelled the Australia into the Twenty20 World Cup final.

The veterans put together an unbeaten 81-run partnership in just 46 balls as Australia recovered from 5-96 to snatch a remarkable victory against Pakistan, who were previously unbeaten in the tournament.

“It was tense,” Stoinis said. “It all happened so quickly. That’s what happens in finals when the pressure goes on.

“Then in between there is the chaos that’s going on in your own head. So you’re just trying to stay calm and keep each other calm. You’re talking through your plans and are really clear with what you want to do.”

It’s difficult to know what is the bigger surprise in the tournament, India failing to qualify for the semi-finals or Australia making it to the final match after their T20 ranking plunged from first in November last year to seventh at the start of the tournament. 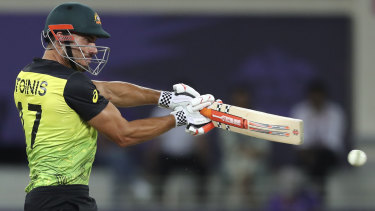 “I don’t reckon many people gave us a chance leading into this tournament apart from probably the players and the coaching staff,” Stoinis said. “So it’s definitely going to mean a bloody lot to us [if they win it].”

Stoinis and Wade have both been through cricket’s wringer, with Wade joking that no one in the team had been dropped more times than him. He had wondered that if Australia lost whether it would have been his last match in the national team.

Stoinis’ experience at previous major tournaments has been very different to the excitement and anticipation he is feeling now.

The 32-year-old was part of Australia’s 2019 50-over World Cup campaign, where he had a top score of 22 and made a second ball duck in the semi-final, which Australia lost badly to England.

Selectors overlooked him for a year but he never doubted he would force his way back into the short-form side, he just wondered when his turn would come again.

“That’s the unfortunate thing that happens at the level that we play,” Stoinis said. “And that’s what happens in big tournaments.

“Usually if things don’t go to plan there’s players that miss out. I joke with Wadey that we were out of the team two years ago. Now we’re batting together at the World Cup and how brilliant that is and how good it is to have mates that you’ve played together with for so long with and shared so many experiences with.”

Stoinis believes those trials and tribulations have made him a better player.

“You definitely draw on your past experiences,” he said. “I sort of build that scar tissue. I’ve failed in situations, I’ve been told I can’t finish a game. We’ve heard all these sorts of things before and I think you need to go through all that stuff and build that scar tissue to go then and stand in the middle in a pressure situation.”