Selections based on a good track.

4. Different Road might hold the key to this race, first run for Chris Waller. Placed on debut on a heavy track. Two trials for the new yard have been handy enough, not pressured at any stage in either. Plenty to like about him, gate one and J-Mac to ride. Go well. 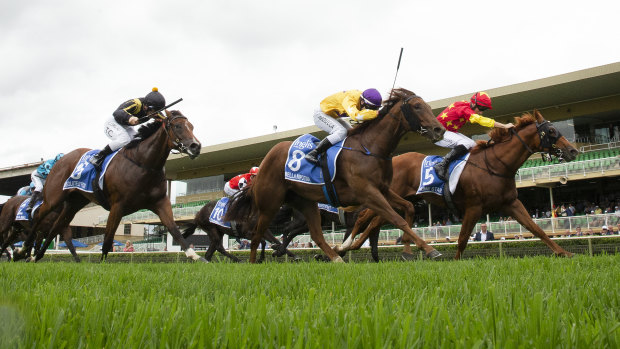 Warwick Farm will host a seven-race card on Wednesday.Credit:Getty

Dangers: 1. Mezidon is a five-year-old on debut, also for the Waller yard, and both recent trials have come on the synthetic. Might have finished last in the latest of those but it was only a 740m heat and he worked home well enough. Keep safe. 11. Mad Darcey had support second-up in a Wyong maiden and made some late ground into third though did have her chance. This is start 10 and from a soft draw she’ll get her chance again. 3. Barmera is an interesting runner, hasn’t raced since May 2021 and did start in the market that day. Gelded and seems to be improving at the trials. Could show up.

How to play it: Different Road WIN. Odds & Evens: SPLIT.

Happy to stay with 12. Step Aside who did more than enough on debut, while beaten as favourite, fought on well to go down narrowly after leading. There was a gap to third and he’ll be fitter. Like him drawn out at this start point and we might see a different side to him.

Dangers: 9. Ocean Honour kicked off in the same race and he wasn’t disgraced running fourth after being a little held up for runs early in the straight. Nash takes over here and he trialled well enough with Step Aside to suggest he can lift a bit more. 6. Gago trialled against the two horses above back a month ago and there was certainly nothing wrong with his close fifth placing there.

Wide gate may see him give away a start but he’s one to keep an eye out for. 16. Chouilly has been in a few times of late, was scratched at the barriers once, and is another worth watching from the inside gate. Her two starts in August were on soft tracks and she wasn’t disgraced on debut getting into a placing from well back.

2. Banana Queen looked the goods winning first-up for two months at Newcastle with a bit in hand and she can only be better for it. Didn’t fire earlier in the year on the heavy tracks so she’ll relish the good ground, can put herself in the race and should be hard to beat.

Dangers: 1. Elettrica comes through what could be a strong race won by Sunshine In Paris at Randwick on Christmas Eve. She was a $21 chance there but she was bailed up for a run before getting to the outside and claiming third. She’s shown enough in three local starts to say a win isn’t far off. 5. Sweet Mercy has been racing consistently this campaign and broke through for a popular win at Canterbury a couple of weeks back.

Whether 1400m is a bit below her optimum is a query but can’t fault her honesty. 4. Silk Tie hasn’t run a place this preparation but all four runs have had merit just behind them. Close up in a couple of Midways in December and could break into the placings this time around.

3. Villaden has run into form at the right time and strikes another very winnable race after putting them away at this trip two weeks ago. Gets a 2kg drop for a class rise but it’s not really much of a lift. Entitled to hold his form and chance to repeat.

Dangers: 4. Shafty comes to town on the back of three strong wins in the country and gets a nice weight advantage over a few above him after the claim. Good chance to measure up. 5. Endorphins has been campaigning in Brisbane and improved with each run back, latest a close fourth over 1825m at Eagle Farm. Proven at the trip and must be respected. 8. Real Peace was a shade disappointing last time out at Canterbury but the run before behind Whanga Wonder at Rosehill was okay and is capable of better, especially in this line up.

Prepared to give 2. Duke Of Buckingham another chance. Ran below par as the favourite here last start though only beaten two lengths. Wasn’t able to work into that race as in his previous wins over the mile. Should get a nice run and strong rider goes on. Can rebound.

Dangers: 1. The Milkybar Kid came through the grades in the winter on heavy tracks so it’ll be interesting to see how he performs fresh on top of the ground. He will race forward and the mile will give him the chance to be competitive. 6. Rosovo was run down by Secret Glamour at Rosehill two starts back, just fair last time at Canterbury when favourite but gets a different set-up here. Looks a good chance. 8. Karlstad resumed with an even effort behind Gundy Bridge two weeks ago though he was a $61 chance and comes up much shorter here with JMac taking over. Mile will suit and if he can regain his best form he can be a factor.

How to play it: Duke Of Buckingham E/W. Odds & Evens: SPLIT.

5. Iron Will has been super impressive in his two country wins from as many starts and looked to have plenty in hand in his all the way win at Moruya. Has good speed and this is only a BM64 so he’s not been deep-ended just yet. Can give a big sight.

Dangers: 6. Hamaki gave backers little cause for concern when scoring as an odds-on favourite first-up at Hawkesbury. Sat off the pace there and was too strong late, draws one here and sure to be hard to hold out. 7. Chipper was competitive in some city maidens as a two-year-old and when he resumed on Christmas Eve he cantered home by over five lengths at Wyong.

Small step up here given that was a Midway maiden but he shows ability and should measure up. 3. Captain Bond has won two of three this time in and was pretty strong late scoring over 1000m at Kembla a few weeks ago. Definite chance.

3. Rockribbed will need a good ride and a bit of luck from the wide gate but it’s a very fair start and he showed enough first-up at Canterbury to say he’ll be suited up in trip. Started favourite there and did close okay late. Should run well.

Dangers: 10. Ka Bling is consistent and did best of the chasers behind Gundy Bridge over 1300m here two weeks ago. Similar set up for him from a handy draw and he will be thereabouts once again. 2. Huon has raced well at this level at Canterbury in three starts since his first-up win. Scored two back then every chance when $1.60 but couldn’t run down Bugalugs. Will be competitive as usual. 12. Cadetship showed some promise as a two-year-old on wet tracks and resumed with a handy win at Newcastle at 1200m. Was a big drifter in betting there so could have plenty of improvement. Keep in mind.

How to play it: Rockribbed E/W. Odds & Evens: SPLIT.