Moderate middle distance maiden to start with a stack of chances. Improving local filly 4. Cherokee Cherry can go one better fifth-up in the mud in her first prep after sticking on strong here 13 days ago. Draws to get a softer run. 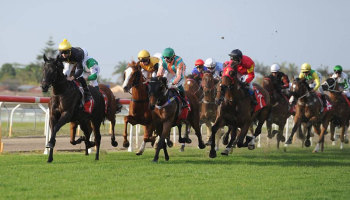 Racing returns to Port Macquarie on Monday with a nine-race card.

Dangers: Plenty of them headed by 2. Duble Memory who showed sharp improvement second-up in heavy going; while 5. Frizelle with blinkers added fourth-up; and 7. Cristalino second-up and down in weight after the claim; are on the next line.
How to play it: Cherokee Cherry to win
Odds and Evens: Evens

A weak field shapes nicely for improving provincial mare 3. A Tender Lady third-up. Has progressed nicely in two runs back from a long break, likes this sort of ground, and was scratched from Wellington on Sunday to be saved for this. Trainer has always had a handy opinion too.
Dangers: Despite not having run a place in eight starts, resuming provincial filly 8. Lady Lucilla finds her weakest race in a long time, and the leading country jockey takes over. Watch the betting on 2. Sonny who returns off a long break, with blinkers off.
How to play it: A Tender Lady to win
Odds and Evens: Split

Lightly raced home track filly 7. Madiba Rose can break through second-up, with a crucial claim. Held her ground OK in a stronger race when fresh at Tamworth, and is by a high-class group 1-winning wet track sire.
Dangers: Provided the inside ground holds up okay, provincial four-year-old 3. The Leopard’s Tale is a clear threat first-up; while 6. Limpida deep into the prep heads the rest.
How to play it: Madiba Rose to win
Odds and Evens: Odds

Plenty of chances here over the longer journey. Consistent provincial five-year-old 2. Noble Cause is the best value in the race coming back in grade and from a soft draw. Has been strong enough to the line in two runs against better opposition since winning a weaker race here three starts ago, and gets back in nicely at the weights after the rider’s 2kg claim.
Dangers: Tough provincial mare 1. Decadent Tale has come off the boil since bolting in her maiden four starts back, but this is easier than her last couple, although up sharply in weight. Keep safe underrated Coffs mare 7. Poetic Power who mixes form, but has ability; while both 3. Yorikiri who steps up from consecutive country wins; although drawn wide; and 4. Sophistication having her second run for the new Newcastle stable after switching from Victoria; can both run into the minor end of the prize.
How to play it: Noble Cause each-way and trifecta 1,2,7/ 1,2,3,4,7/ 1,2,3,4,7
Odds and Evens: Split

Kembla-based US-bred four-year-old 1. Angry Liam only needs to run up to his recent form to break through fifth-up this prep. Worked home at big odds from a long way back on a Heavy 9 surface at home three weeks back, and this is a weaker affair. Over the odds.
Dangers: Improving three-year-old 5. Razzama has been up for a while, and led for a long way at this track last start before being collared. Up in weight, but has plenty of heavy track experience. Include 12. Waipio who is hard fit and OK in the ground, but was ridden too close last start. Local four-year-old 2. Justadude has been racing exclusively on heavy tracks this prep and is one of several each-way hopes.
How to play it: Angry Liam to win
Odds and Evens: Split

Back to the shorter trip for the restricted sprinters, and typically again there’s a stack of hopes. Home track four-year-old 2. Zoom Outcome has won two of his last three on rain-affected ground, and boasts more scope than the rest. Tracked the speed last time here before driving late to score in a better contest, and only carries 1kg more after the jockey’s claim. The one to beat.
Dangers: Another one in the best form of his career is 4. Flash Palace who shoots for three straight wins stepping up from a weaker affair here a fortnight ago. Drawn out, but has early tactical speed. Provincial filly 3. Bullinachinashop has ample ability for this grade and is already a second-up winner from six starts, but drawn off the track and not convinced she’s happy in heavy ground.
Lightly raced 5. Dazzling Charm who resumes, 6. Mr Pointer who returns behind a nice trial and was preferred here to Sunday’s Wellington meeting and 10. Our Boy Macolm who beat a similar field here 13 days ago all go through the exotic plays.
How to play it: Zoom Outcome to win
Odds and Evens: Evens

Like improving four-year-old 3. Mariinsky second-up for the new home track stable sneaking down in the weights. Hit the line under 63kg in consecutive runs in Victoria before heading to this region where he returned with a strong closing effort three weeks back in a CL1 on a Heavy 9. With that run under his belt, he can settle a little closer from a handy draw, and produce a superior final 300m.
Dangers: Plenty of them headed by local four-year-old 2. Mista Razzledazzle who will have to slot in from an outside barrier, but hit the line impressively third-up here in a deeper race, and blinkers go back on. Keep safe 4. Evocator who has won his last two at this track in heavy ground up to a similar level, but faces a bit more depth here. Honest mare 8. Mon Amore is fit, and also drops back from CL3 company, and looks well treated carrying only a half-kilo more. Local filly 6. Super Dooper third-up, and 7. Dunoon fourth-up, are best of the rest.
How to play it: Mariinsky to win
Odds and Evens: Split

Any number of chances in a likely wide market, especially if there’s a pattern late in the day. Progressive local mare 2. Darci Diva is ready to win fourth-up. Has stalked the speed before beating all but the winner in her last two, and gets a little weight relief here after the claim.
Dangers: Provincial filly 5. Collier Bay was strong, claiming her maiden first-up, setting a good speed before fighting off the challengers, and is destined for better races. Watch the market on provincial mare 1. Dark Herring who has been given a 10-week freshen-up since charging home in a country CL1. Include consistent provincial filly 6. Eva Daniela who ran three straight second placings before nailing her maiden at Muswellbrook; while 3. Huriwai with blinkers back on goes in trifectas and first fours.
How to play it: Darci Diva each-way and box trifecta 1,2,5,6
Odds and Evens: Split

Tough closer, but expecting talented mare 2. Par Avion to produce her best off a 10-week freshen-up. Previously had attacked the line late in three runs, culminating in the much tougher Country C’ship Wildcard at Scone, and she boasts a superior record on rain-affected ground.
Dangers: Coffs six-year-old 3. Dollson hasn’t won for a while, but is very honest and likes to roll forward; while 7. Mister Larrabee drops in class a month between runs via a quiet trial. Include 4. Pace Stick second-up, and 8. Bojack third-up, in wider exotics.
How to play it: Par Avion to win.
Odds and Evens: Split.