We start over the mile on a track that will likely stay well into soft range. Not much between the leading few here, although after breaking through second up at this track, metro three-year-old 3. Brynner can go right on with it. He came from near the back in heavy ground to beat handy maiden opposition, and has solid enough form up to 2000m.

Dangers: Improving filly 6. Spellz is better placed coming back 400m in distance, and she’s developed a real liking for this circuit. Provincial mare 4. Classic Train hit the line well last start when ridden much quieter, although not well in at the weights rising 4kg.

How to play it: Brynner to win
Odds and Evens: Split

Wouldn’t be diving into too short a price about capable Randwick filly 6. Auspicious Cloud, but she’s the one to beat fourth up after a good closing effort at Canberra. Surged home to win her maiden at only previous start at this track, and from a good trailing draw with a far superior and stronger jockey taking over, she’s got more upside than the rest.

Dangers: Keep very safe 9. Makadeel who was well beaten behind the top selection here three starts back, but she’s continued to improve, and also gets back down to the minimum weight. Canberra five-year-old 1. Epizeel took 26 starts to break his maiden at home before sticking on okay in stronger country grade. Up sharply in weight, but a senior rider takes over, and there’s a few here just going around for practice.

How to play it: Auspicious Cloud to win
Odds and Evens: Split

Tough and likely wide open contest for the maidens at set weights. Leaning to provincial three-year-old 4. The Seeker who resumes for a second prep behind two steady trials, with winkers coming off. Found the line OK in two deeper maidens last time, and reportedly has strengthened up. Was preferred here to the provincial card at Hawkesbury on Sunday. 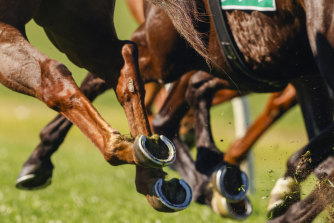 Racing returns to Goulburn on Monday.Credit:Getty

Dangers: Talented 2. Hotstep bumped into a smart one on debut in heavy ground at Newcastle, and has more than enough ability to win this, with blinkers coming off. Was scratched from Hawkesbury on Sunday to be saved for this. Watch the betting too on well-bred metro two-year-old 11. Let’s Roll coming off a fair debut run 18 days ago; while local filly 6. Crazy Ladies goes in exotic bets.

How to play it: The Seeker to win and quinella 2 and 4
Odds and Evens: Evens

Progressive metro three-year-old 1. Lady Fraulein is ready to break through third-up in her first real prep. After flopping first-up in much tougher company when leading, was ridden quieter at Gosford four weeks back and finished off well. The handicapper hasn’t missed her with 60kg, but first time back at country level, and bred to thrive in soft ground, she’s the class factor.

Dangers: Home tracker 6. Negation failed to run on in a deeper metro field first-up, but has since bolted in a trial, and this is far more to her liking. Expecting sharp improvement down in grade second-up from 3. Mad Darcey who was only beaten three lengths behind a promising one who then saluted at Rosehill on Saturday; while big watch on American Pharaoh two-year-old debutant 9. Pavitra behind two trials. At big odds, 10. Poppy’s Girl is worth including in exotics coming back from four runs in provincial company, and blinkers going on.

How to play it: Lady Fraulein to win
Odds and Evens: Split

Tough local four-year-old 3. Master Joe is primed after chasing home two very handy winners to start his career. Winkers have been applied and the decision to stay at this distance, with good tactical speed from the draw, is a vote of confidence from the trainer.

Dangers: Promising filly 6. Selfie Time resumes for a third start, and was close-up in a turf trial before an even trial on the synthetic 10 days ago. Big gap to the rest headed by 7. Glint Of Silver third-up.

How to play it: Master Joe to win
Odds and Evens: Split

Off an eight-week break and nice trial, emerging four-year-old 2. King Charming is well suited from the draw, and a mile over the odds. Stuck on well after leading in a tough race last time, and won two straight last spring before being transferred into the David Pfeiffer yard.

Dangers: Keep safe 5. I Love Lucy who led all the way to comfortably win a CL1 second-up; while both 8. Red Hot fresh; 10. Squiggles also first-up behind two quiet trials; and 13. One Pose off a first-up BM 58 win here if he gets a run; are all each-way chances at odds.

How to play it: King Charming each way
Odds and Evens: Evens

Keen on metro three-year-old 2. Cinque Torri second-up and six weeks between runs, with blinkers removed. Looked sharp bolting in a recent trial, and this is the ideal distance and ground for a galloper capable of winning much better races.

Dangers: Local three-year-old 5. Charlemagne has finished off well in his last couple after being given way too much to do, and drops in quality. Drawn wide, but he likes to have room and get to the outside; while 8. Newtown Braveheart third-up; and 10. Miss Barty’s Party also third-up; are the best of the rest.

How to play it: Cinque Torri to win
Odds and Evens: Split