Sixers captain Ellyse Perry has celebrated her 31st birthday by taking her side to a fitting victory against the Hobart Hurricanes by 31 runs.

After a recent form slump, the Sixers changed their batting order to put their most experienced players up top with Perry pushed from No.4 back up to opener in recent weeks.

It seems the move has finally clicked, with the Sydney side putting together back-to-back wins on Wednesday at the WACA.

Coach Ben Sawyer raised eyebrows in recent weeks when he made the call to push Perry down the batting order.

Sawyer held a press conference to explain the decision was made with Perry, with the coach also eager to give the likes of teenager Shafali Verma a chance at the top.

But the pressure seemed all too much for the younger players so Sawyer recently reinstated the star trio of Perry, Alyssa Healy and Ash Gardner back in the top three positions.

Proving she is still at peak form, Perry hit 47 runs during the Wednesday clash before Gardner mustered a half-century (51) in the Sixers’ total of 4-141. 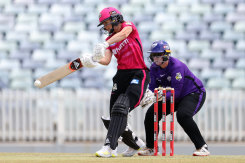 On Sunday, the Sixers had a massive win against the Perth Scorchers with Healy smashing an unbeaten 94 runs.

Sixers fast bowler Maitlan Brown said the side was “pumped” to be seeing the results of putting their experienced players back up the order.

“I think it’s really nice the combo of Pez [Perry] and Heals [Healy],” she said.

“It’s just a really nice balance. Then Shafali [Verma] can come on and have a big hit when the ball gets a bit older.”

Brown, who claimed two wickets from her four overs, said the team would probably stick with the current batting order now given their recent success.

Before their clashes over the weekend, the Sixers were awarded a six-day break which Brown said helped the team reset after a string of losses.

“We will probably keep a similar set-up, as long as someone from our top three or four can go big,” she said.

“We struggled with those back-to-back loses, and we just put our heads down. We’ve got a lot of clarity now.”

Perry came into the warm-up with a party hat on for her birthday before falling just short of a deserved half-century.

Brown said teammates did their best to convince the captain to wear the hat out to the coin toss. “We tried our best but she’s too professional for that.”

Hobart were simply unable to get off the ground to chase the Sixers target of 142 only managing 110 from their 20 overs.