Chief selector George Bailey kicked off the summer speculation season with some serious conjecture-killing comments, but his obfuscations will reach a new level as he sorts through the Tim Paine imbroglio and affixes the (c) to a new man.

The Test future of Paine was in doubt even before Friday’s revelations and resignation.

His position in the team hung, first and foremost, on his leadership qualities. He was the man given the imprimatur to restore competitive integrity to a collapsed brand. This he did with nerve and style, staring down loud grating voices and tempestuous characters. His reconstructive duty had been widely considered a success with minor qualifications, but now a finger tap from history and his own behaviour have ended the reign. He will not get a chance to bow out with dignity or acclaim, cuddling the small urn. That moment will now likely become the vision of Pat Cummins. Paine says he wants to play on but that would seem far-fetched.

Looking past the scandal, Paine hasn’t played a competitive game since April and his form with the gloves and bat fell away during the India series. He recently had neck surgery, which can be a tricky, complicated recovery. Playing professional sport with a physical skill that requires diving, tumbling, stretching up, laterally down both sides, running to the stumps for most deliveries for hours, has an inherent risk of fatigue and injury. If he remains in the team, Paine would begin the toughest of series with a question mark over his cervical joint and his resilience.

Bailey and crew may well have been confronted with the difficult decision of leaving Paine out at late notice before the first Test, or perhaps early in the series, which would have been seriously disruptive. Now they can see the way ahead of getting Alex Carey in, building for the future and giving a new captain some clean air. Fortunately, Carey has been named as the back-up wicketkeeper, so there will be no speculation as to the positions of Jimmy Peirson, Josh Inglis, Josh Philippe or Matthew Wade.

Paine isn’t the only captain in the firing line. Joe Root has been largely silent after Azeem Rafiq’s revelations of racism while he was a Yorkshire player, the county where Root also plays. The English government is discussing withdrawing grassroots funding and taking legislative action if the England and Wales Cricket Board “don’t get their act together”. 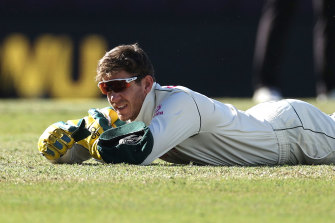 Tim Paine hasn’t played a competitive game since April and his form with the gloves and bat fell away during the India series.Credit:Getty Images

For Australia, it’s not just Paine’s position in doubt. Given last summer’s history-making loss to India, the debate over the first Test team should be lengthy, expansive, divisive and include numerous candidates for batting spots.

“We have picked a squad so that there will be a squad,” said Bailey, taking the first tentative steps down the Monty Python path so often an option of his predecessor.

The first Test starts on December 8, somewhat late for an opener but in these COVID-19 hit states the show must go on, whenever and wherever. There is even a wondrous rumour that the Democratic Republic of Western Australia will host a Test. Australia will play an “intra-squad” game on December 1-3 and, given we are told the Test squad won’t change, the match seems a glorified centre-wicket practice session with no real outcome or the pressure that comes with definitive consequences. At least now it is a good chance for Pat Cummins to take the helm.

Contemporary cricket schedules don’t allow for international players to turn out for their states that often. It denigrates the learning opportunities of up-and-comers and stifles the leadership experiences of captains.

Cummins has been made vice-captain, and a good thing too, but has he learnt the nuance and percussion of leading disparate characters through a myriad of scenarios which fly at you in the longer forms? There is no substitute for experience, and cricket is a game that experience rewards time and time again.

Cricket Australia has no visions of succession planning for elite coaches and captains, preferring myopic glances at the next match in search of short-term gratification. Sometimes the best batter is chosen, sometimes that works. Bob Willis captained Warwickshire through county campaigns and Imran Khan lead the Punjab before his anointment as Pakistan skipper. Courtney Walsh captained the West Indies in 22 Tests after leading Jamaica and Gloucestershire. These fast bowlers had extensive experience and made fine Test captains. Cummins doesn’t have the experience but he has the intellect and the men who will follow him. The time has arrived like a steam train through fog for his turn to lead the Test team. Being a bowler of any type is an absurd argument against captaincy. He will look and learn from people and events, and he will get better.

As for who Australia will pick in their XI, very little appears cut and dried. However, Bailey has decided that three weeks out from the Woolloongabba opener that he, Tony Dodemaide and, I assume, Justin Langer have announced the 15-player squad and nominated Marcus Harris to take the crease as the second opener alongside David Warner. No need then to discuss the credentials of Daniel Hughes, Henry Hunt, Joe Burns or Cameron Bancroft. Bancroft must be wondering how long his incarceration in sandpaper purgatory will continue as he doesn’t even rate a mention in dispatches these days.

Australia won’t play two spinners, so that eliminates the burgeoning Mitchell Swepson. The three quicks who won the T20 World Cup (isn’t that a turn up for 20-over orthodoxy!) will start along with Nathan Lyon. The bowling is fixed, for the first Test at least. 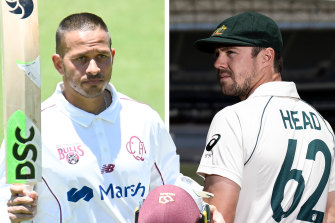 Usman Khawaja and Travis Head are in a shootout for the No.5 Test spot.Credit:Getty

Bailey also says he knows who will be chosen in the middle-order battle between Travis Head and Usman Khawaja but isn’t revealing. Fair go George, on the one hand you stymied the openers question and on the other you’re running a middle-order show and tell. Hopefully, the players concerned know where they stand so they can prepare appropriately.

The advantage both Head and Khawaja have is that they have been playing Sheffield Shield matches and have been making runs across the four-day format. Khawaja has been in outstanding form, his 70 out of 129 versus a quality Western Australia attack on a classic first day Gabba green wicket in the Shield may have assuaged some opinions that he only makes runs against modest bowling. He should get the nod, especially as he will be playing on his home strip.

Warner, Smith and the bowlers have had the glory of a World Cup win but nothing of the mental and physical grind that comes with long days in the field, hours concentrating at the batting crease, sharp focus on slip catching and backing up day upon day, Test upon Test. Time spent in quarantine with skirmishes to the nets is hardly adequate preparation for a Test series – five Tests in six weeks no less.

Even with a full first-class lead-up, the intensity of continual backing up with little recovery time would be a challenge. The bowlers will be most affected. Numerous net sessions and practice games are pallid substitutes for live competition. Four overs a match every second or third day does not toughen bodies for Test cricket, but the trade-off is a World Cup in the trophy cabinet. That is the modern game, the COVID environment.

Cummins, Starc and Hazlewood are veterans who will find their best possible path into the series, but it will be far from ideal. Marnus Labuschagne, Head, Khawaja, Nathan Lyon, Cameron Green, Michael Neser, Swepson and Jhye Richardson have been playing state cricket for a month and will be better prepared. The compressed international summer implies there will be a turnover, a rotation of fast bowlers and this is where the recent international retirement of James Pattinson will hit hard. Richardson and Neser will get their chance at some stage.

In a convoluted way, the Paine resignation could help Bailey get it all sorted, but I think he may have fingers and toes crossed and hope the new skipper and World Cup heroes find their Test-match mojo early. If England eke a win at the Gabba, as they did in 1986-87, the glory of a T20 World Cup triumph will descend rapidly into a summer of discontent, no matter who is tossing the coin.