In a flashback to the past, Reece Jones was a mix of saddle finesse and jackhammer at Rosehill Gardens on
Saturday.

Perhaps Jones, 25, is an apprentice, if not in years but experience, yet still with a three-kilo claim he produced the skill of cold riding with two of his three winners while rivals were in a fluster. 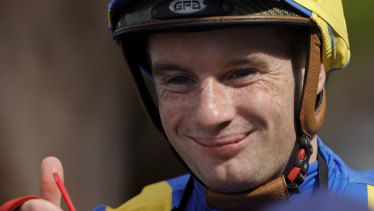 Apprentice jockey Reece Jones enjoyed a day out at Rosehill.Credit:Getty

Once punters were elated with the patience of Scobie Breasley, Billy Cook, Athol Mulley and more recently Peter
Cook, who would sit quiet while others made early moves.

Champion trainer Tommy Smith’s 33 Sydney premierships were based on his jockeys being prominent in
races, a situation supported by stipendiary stewards preaching navigators to be active 600 metres
out, blending with “trying” to the watching eye.

Usually apprentices are best placed up close, handy to the lead and out of harm’s way because experience and
judgement of pace is required to get back in the field before cutting loose at the right time. Jones
excelled on O’Mudgee (Ranvet) and Casino Kid (Chandon), prepared by Jan Bowen, who, like Kristen Buchanan
evidenced by Oakfield Arrow (Midway), does so well with so little.

Jones on Casino Kid maintained calm in what could have been a dicey situation, but the finish was smooth in a Peter Cook fashion leaving James McDonald, an all-time great, scrambling behind him.

J-Mac had a day to forget. Starting at $1.04 in the jockeys challenge, he didn’t ride a winner, surely a record through no fault of navigation. A couple of his mounts would have been better placed in a cart and just when he looked like breaking his duck on Tycoonist in the last, the Rosehill Bowling Club Handicap, Jones produced the benefit of his jackhammer background.

Before the turf Jones was a labourer and a dab hand with the tools. With J-Mac in full flight on a last-start winner, Jones handling True Detective, resuming after a spell, applied the necessary pressure, a dignified shake, rattle and roll to get up in a bob of the heads finish.

Sydney racing is in the doldrums with many common events but surfaces are good under difficult circumstances. Some see the lack of top jockeys, interstate and COVID, as a major negative. However, the apprentices have been scintillating with a boom period for the category: Jones, Tyler Schiller, and Tom Sherry have led the way.

The talented Cejay Graham was back after injury at Rosehill on Saturday and Dylan Gibbons, from Newcastle, is ready to be launched on the Sydney scene.

Alas, the riding instruction rule is a personal bugbear and negative to come out of Rosehill on Saturday. O’Mudgee was a late notification of being back in the field and Schiller’s judgement on Garibaldi in the Bowling Club was questioned. 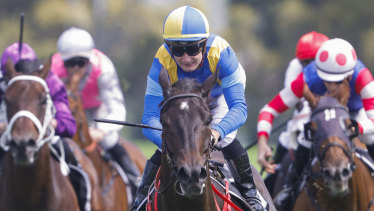 O’Mudgee under Reece Jones guns down stablemate Canasta at Rosehill.Credit:Getty

Yes, O’Mudgee downed stablemate Canasta, up front and ridden bold by Josh Parr. Trainer Bjorn Baker will be
grilled over the late switch notification to the rear for O’Mudgee. Surely stewards didn’t expect him to be gut
busting with Canasta?

Schiller, so smooth on Kingsheir in the Petaluma and the most impressive winner on the program, was advised by
the stewards “he had made an error of judgement from the 650m by not placing his mount under more pressure” on Garibaldi.

Three-kilo claiming apprentices are still learning their trade so this aged hack doesn’t need to be harsh on them. It’s the stipes’ duty to rectify. Obviously, Schiller didn’t get it right on Garibaldi, but it emphasises the merit of the Jones double.

Despite the acceptance of the change of riding instructions, to me it takes the initiative out of the saddle: the advantage of instinct when the field jumps and not being tied down to a tactic devised by a desk-top jockey.

Anyway, Reece Jones rekindled visions splendid out of what could have been a gloomy Saturday.