Glenn Maxwell has been drafted into Australia’s Test squad on the tour of Sri Lanka.

The news comes as Australia suffer an injury epidemic, with Travis Head joining a long line of players ruled out of Friday night’s final one-day match against Sri Lanka due to a hamstring strain.

Victorian all-rounder Maxwell was called up on Thursday night ahead of the opening Test match in Galle next week as Travis Head recovers from a minor hamstring strain.

He also scored his one and only Test century against India in Ranchi in 2017.

Australia’s white-ball captain Aaron Finch claimed Head’s absence on Friday night was more of a precaution, but he was unable to say how long he would be out of action for. 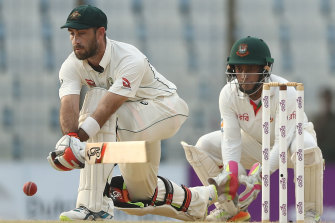 Glenn Maxwell during a rare Test appearance against Bangladesh in 2017.Credit:Getty

“He fields in the outfield so he does quite a lot of ks (kilometres) out there and the grounds are quite heavy,” Finch said. “I’m not sure what it’s looking like for the Test matches, but he’s definitely not available for tomorrow (Friday).”

Josh Inglis is poised to make his one-day debut in place of Head having played seven T20 matches for Australia.

Steve Smith (quad strain) and Mitchell Starc (cut finger) have also been ruled out of Friday night’s dead rubber, although both are expected to be fit for the Tests. 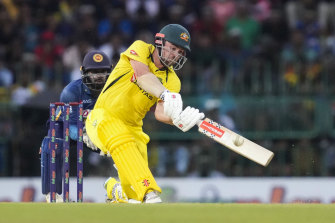 Travis Head has suffered a hamstring strain and is in doubt for the first Test.Credit:AP

Not so Ashton Agar, who has a side strain, raising questions about who Nathan Lyon’s spinning partner will be in Galle. It would be no surprise if Agar joined the early departure list, which has seen Marcus Stoinis (side strain), Sean Abbott (broken finger) and Kane Richardson (hamstring tendon) sent home earlier in the tour. Mitchell Marsh has just began playing again after suffering a calf strain.

Somewhat ironically, Head received a late call-up to Australia’s one-day side while playing for Australia A. He was flown from Hambantota to Kandy to cover for Stoinis, while Queensland left-arm spinner Matthew Kuhnemann, 25, was plucked from the same A game as cover for Agar.

With Australia’s selectors clearly favouring finger-spin ahead of leg-spin, Kuhnemann is a chance to make an unlikely Test debut ahead of Mitchell Swepson retaining his place from the Pakistan tour earlier this year.

However, veteran Victorian left-arm spinner Jon Holland flew into Sri Lanka this week and could play the Test as a replacement, just like he did when Steve O’Keefe broke down in Sri Lanka six years ago. 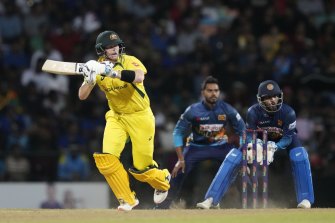 Steve Smith has been ruled out of Friday night’s final one-dayer against Sri Lanka with a quad strain.Credit:AP

Despite the string of injuries Swepson has played just one match in this one-day series on increasingly slow, turning pitches.

“We think that runs are probably more of a premium in these conditions so we’ve gone with the extra all-rounder,” Finch said. “Unfortunately, Mitch Swepson has missed out the last couple of games but as purely just on balance of the side trying to get more runs out of the game.

“We feel as though we’ve got Maxie (Glenn Maxwell) at seven and Cam Green at eight so that then we can stretch those partnerships … we still feel like that’s the right balance of the side. We just haven’t quite got enough runs.”