Just days after getting a stunning VRC Derby win with Hitotsu, Ciaron Maher Racing has its eyes set on another 2500-metre grand final with a three-year-old, this time with Oaks contender Biscayne Bay.

Co-trainer Maher said the Cup week target had been set a long way out for the daughter of Sebring, who was beaten by three lengths in the Ethereal by Daisies at her most recent start. 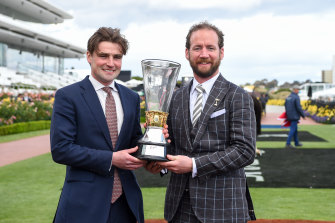 “It’s been her target from a long way out. I’m very happy with her,” Maher said.

“Her work’s good. She’s a very clean-winded filly, and she had a nice stride around [Tuesday] morning. I think she’s right to go.”

Maher said the Australian Bloodstock-owned filly would wear blinkers for the first time, in an attempt to sharpen her up for her grand final.

“I put the shades on her too, which is probably the key for her,” he said.

“She was just very unfocused, I supposed, and that seems to have focused her up the right way. They should help her.

“I’ve had this target as her plan and couldn’t be happier with how she’s going.”

Bringing similar form lines is Glint Of Hope, who split Daisies and Biscayne Bay in the Ethereal at her last start.

The Trent Busuttin- and Natalie Young-trained filly is by Japanese stallion Deep Impact, and Busuttin was hopeful the Japanese influence that won Maher the Derby might help him win Thursday’s Oaks. 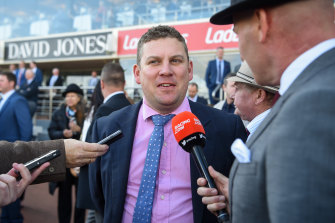 “I’d certainly be happy if that was the case,” Busuttin said.

“She’s very consistent. She’s obviously still a maiden, but she’s running well. She’s going to see the 2500 metres out, no worries; being by Deep Impact, it’s not a concern.

“There are probably a couple of fillies in there that are a bit classier than her, I’d suggest, the way the races have finished in front of her, but I’d say she’s a genuine top-four chance.”

Busuttin said he had taken her preparation race by race, but after four starts for four placings, Glint Of Hope had continued to press for selection.

“To be honest, she’s not the biggest or strongest of fillies, so we’ve been taking it one step at a time, thinking at any point she’d go out,” he said.

“But she’s kept on going well and being well, so she’ll present well and happy, so why not.

“She’s finished within a couple of lengths of them [the favourites Elusive Express and Daisies] both times, and they’ve beaten her fair and square.

Elusive Express is a $3.80 favourite, from Wakeful Stakes winner Willowy at $4.40 and Daisies at $5. Biscayne Bay is on the next line of betting at $7 from Glint Of Hope at $11.