Khaadem could try to emulate former Charlie Hills-trained stablemate Battaash by using victory in yesterday’s King George Qatar Stakes as a platform to win next month’s Group One Nunthorpe Stakes at York.

The lightning-fast Battaash won the race at Goodwood a record four times and twice followed up with a win on the Knavesmire.

Hills held out lofty aspirations for Khaadem after he cruised to victory in today’s Stewards’ Cup as a three-year-old in 2019. 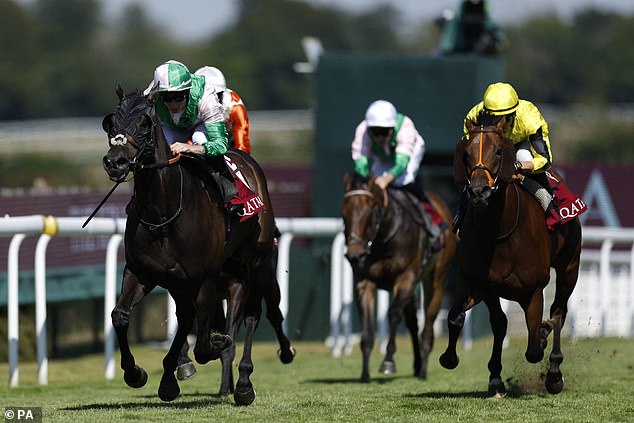 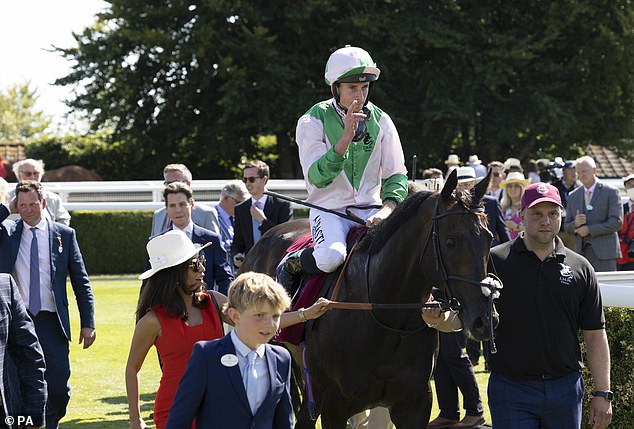 The gelding has not hit the heights his trainer hoped but after the 8-1 shot — ridden by Ryan Moore (right) — held off favourite Raasel by a neck, Hills said he still believed the six-year-old has a top-level win in him.

Hills had been convinced Khaadem was in great heart after his ‘run’ in the King’s Stand at Royal Ascot, where he lost his jockey rearing as the stalls opened as well as a dozen lengths yet still crossed the line upside impressive Australian winner Nature Strip after galloping riderless.

Hills said: ‘He is a very good horse with a lot of speed. Ryan was very positive after and we will look now for a Group One. 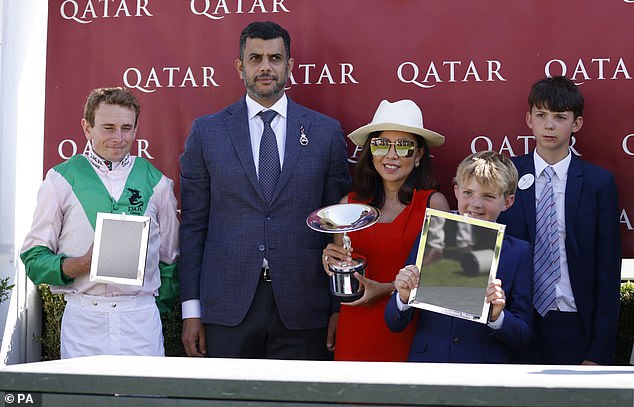 ‘He is growing up. Sprinters can take their time. As a three-year-old he had a fantastic season but it then did not quite work for him as a four-year-old.

‘When Battaash won this race and Khaadem won the Stewards’ Cup the next day, someone told me that he clocked quicker sectionals.

‘We have always thought he could get to the top table. Maybe it’s age, maturity or being a gelding.’

Khaadem carries the colours of Jim and Fitri Hay, who won Thursday’s Richmond Stakes with Royal Scotsman. But he originally raced, like Battaash, for the late Sheik Hamdan Al Maktoum’s Shadwell Stud operation.

Mick Appleby-trained Raasel also used to be owned by Sheik Hamdan, meaning the King George was a battle of the Shadwell cast-offs.

Jason Watson rode his first Glorious Goodwood winner since 2018 when he landed the Coral Golden Mile on David O’Meara’s 20-1 Orbaan, who went into the race on the back of a 24-race losing sequence. 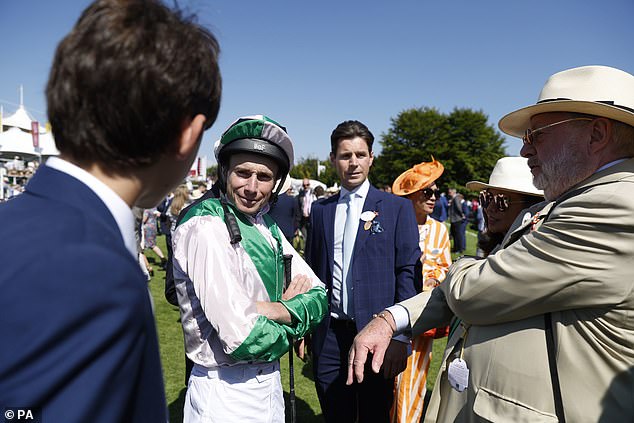 Watson was champion apprentice in 2018 and since then the 22-year-old Watson has ridden his first Group One winner as well being appointed and then losing the job as stable jockey to Roger and Harry Charlton. But his career is on the rise again, thanks to a link-up with Yorkshire-based trainer O’Meara.

Watson, who switched mounts when Shelir was scratched and rides Summerghand for the trainer in today’s Stewards’ Cup, said: ‘I am very grateful to Dave and the team who have been very supportive. I’m just pleased I’m back on the big stage.’

It was a career-best effort for a six-year-old, who is lucky to be alive. As a two-year-old he contracted meningitis and was given only a five per cent chance of survival.

Cazoo Derby winner Desert Crown looks like missing the rest of the season because of the injury which ruled him out of last Saturday’s King George VI & Queen Elizabeth Stakes at Ascot.

What was originally thought to be a hoof issue by trainer Sir Michael Stoute has now been identified as leg problem.

While it was described as ‘nothing major’ by Bruce Raymond, racing manager for owner Saeed Suhail, the timetable for a potential return to training to get Desert Crown primed for the Prix de l’Arc de Triomphe on October 2 looks too tight.

Raymond said: ‘Luckily the owner is very patient and he said, “Whatever Michael wants, I’m not going to press him”. I know Sir Michael wouldn’t rush this horse.’

Desert Crown is unbeaten in his three races. The intention is for him to race on as a four-year-old in 2023.