Jonas Vingegaard thundered through the last serious test of the Tour de France to increase his overall lead on Saturday and all but guarantee winning cycling’s biggest race.

After three weeks of exhausting racing, the Jumbo-Visma leader dug deep in his reserves to deliver yet another impressive performance in a long-time trial in southern France.

Vingegaard, who is not a pure specialist of the race against the clock, could have played it safe given his more than three-minute lead at the start. He, instead, took all the risks on the technical course and had a scare close to the finish when he misjudged a curve and had to brake hard to avoid a crash. 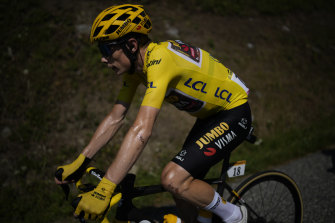 Denmark’s Jonas thundered through the last serious test of the Tour de France to increase his overall lead on Saturday.Credit:

Vingegaard then slowed down dramatically as he approached the finish line. He finished the 20th stage in second place behind winner Wout van Aert, his key teammate.

Van Aert crossed the finish line with a blistering average speed of 50.9km/h. The 41.7km stage from Lacapelle-Marival to Rocamadour was the longest individual time trial since 2014.

With the final day of the race on Sunday usually uneventful until the last sprint on the Champs-Elysees, Vingegaard will become the first rider from Denmark to win the Tour since 1996, barring a crash or a last-minute incident.

The time trial marked the final hurdle of an epic race that has featured a thrilling duel between Vingegaard and two-time defending champion Tadej Pogacar.

Vingegaard built his success in the mountains. He first took the yellow jersey from Pogacar in the Alps with a memorable ride up the Col du Granon, and followed up this week with an impressive display of strength in the last Pyrenean stage to the resort of Hautacam.

Given Vingegaard’s healthy time advantage, it was unlikely Pogacar would be able to challenge the Danish rider’s supremacy in the time trial. Pogacar took third place, 27 seconds behind Van Aert.

Vingegaard will carry a lead of 3 minutes, 34 seconds over Pogacar into the final day, a 116-kilometer ride to Paris. Geraint Thomas, the 2018 Tour champion, lagged more than eight minutes off the pace in third place.