Cricket is often an insular sport. With only 12 men’s Test-playing nations and cuts to the World Cup format, there are very few opportunities to watch emerging nations ply their trade.

The biennial T20 World Cup is one of the few chances to see top associate teams competing against the best players in the world. When associate teams play in top events, they can spring major surprises, with the Netherlands famously beating England in the 2009 World T20 and Kenya reaching the semi-finals of the 2003 World Cup.

This year, it has been Namibia’s turn to capture the attention of the cricketing world, as they reached the Super 12 stage of the competition and won their first match at that stage against Scotland.

The Namibian team had only ever competed played in one major cricket tournament, the 2003 World Cup where they lost every game.

But Johan Muller, CEO of Cricket Namibia, has not been surprised with his team’s performance in the UAE and is eagerly looking forward to their last remaining clashes against New Zealand and India.

“We’ll always be small in numbers, but the quality of our talent is up there with any country,” he said. 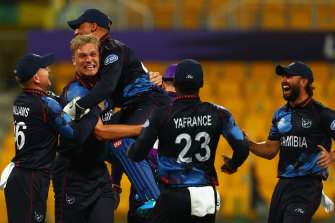 Ruben Trumpelmann of Namibia celebrates the wicket of Richard Berrington of Scotland during the T20 World Cup match between Scotland and Namibia.Credit:Getty

With a languishing cricket scene in Namibia, Muller and the board developed a strategic plan in 2019 to turn around the sport’s fortunes in the country. Muller, who has a background in South African cricket, used his knowledge of Australian domestic cricket structures and the AFL to benchmark goals for the team.

“We organised quite a number of tournaments at home that helped the team prepare on field. And you can clearly see what that has done in terms of their performances,” he said.

The board also decided to play less long-form cricket and focused on achieving ODI status, which provided more funding.

“Focusing our resources on white-ball cricket immediately made a change in terms of our finances,” he said.

Head coach Pierre De Bruyn’s challenge was arguably even greater. Joining Cricket Namibia at the end of 2018, he was presented with a team unhappy with their performances and marred by disunity. 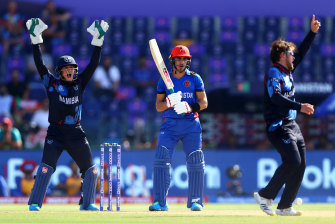 Zane Green and Nicol Loftie-Eaton of Namibia successfully appeal for the LBW of Rahmanullah Gurbaz of Afghanistan.Credit:Getty

“It was a disorganised playing environment. As a coach, it was important for me to look at the culture. In 2018, they lost to Botswana, which is absolutely crazy,” De Bruyn said.

“It started with tough conversations. As a group, you sit down in a room, and you unpack the current situation. When you unpack a culture that’s not operating [well] there will always be unhappiness. There won’t always be clarity, but you try to resolve [the issues] and build trust in the group.”

For De Bruyn, seeing the team’s success and the camaraderie of the playing group validated his hard work.

“It’s taken some blood, sweat and tears, that’s for sure. It’s a fairytale,” he said.

Both De Bruyn and Muller view the team’s success as a testament to players’ characters. Until recently, when 18 players were awarded professional contracts, players needed to work other jobs to make ends meet. According to Muller, this has enhanced the team culture, with players bringing varied experiences to the team.

“They all had to sustain themselves in terms of other studies or work just to be able to play now. So hard work, passion, dedication and pride is completely the foundation on what they play for.

“[Our players] haven’t been used to receiving full-on salaries, they all have had to work in some way to attract other income. But that has made them better people. It’s made them more holistic in terms of a character that gets developed through that.”

Muller hopes that funding from the team’s success will allow more players to play professionally and allow the board to continue to develop the game and maintain talent, who often move to South African universities to study.

“We need to create better facilities and better infrastructure, higher numbers of participants in all competitions and at school level. Then, we need to produce better coaches. A big focus is to develop better people who can coach our young talent better.”

Developing young talent has been a primary focus for Muller throughout his leadership. Yet in Namibia, cricket remains inaccessible for many. Despite a majority black population, the men’s professional team is still overwhelmingly white. Muller accepts that change needs to continue to occur but believes that this change is happening behind the scenes and will continue to improve as exposure grows.

“As an organisation, 60 per cent of our staff are female and 70 per cent are black. You must see the holistic picture before you measure it with just one team on the field. We want every child that grows up in Namibia to have access to the game and that is our focus irrespective of race. We select our best teams because we need to measure ourselves against the best. But the rest of our organisation has to target complete development within Namibian culture.”

Unlike neighbouring countries with British colonial origins such as Zimbabwe, Namibia has German colonial origins, which, combined with the expense of cricket, relegated cricket to a secondary sport in Namibia. 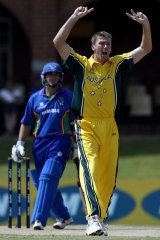 Australia’s Glenn McGrath celebrates taking the wicket of Namibia’s Bryan Murgatroyd for a duck during the World Cup match in Potchefstroom, South Africa, in 2003.Credit:Reuters

“Soccer is more popular in Africa just because of the ease of access to the game. You just need an open field and a round ball, and you play. And rugby is a traditional sport,” Muller said.

Even now, cricket is seen as a sport for the elite. There are only five main cricket clubs in Namibia and four are in the capital, Windhoek. However, Muller believes that the team’s success will allow the game to continue to grow, a change already being seen in the country.

“Cricket has changed its perception in the last two years where we now have bigger development programs than rugby and we have higher participation numbers at school. It is by far the highest growth rate of any sport in Africa.”

Captain Gerhard Erasmus agrees, suggesting that the sport will continue to grow and become representative of the entire Namibian population with their success.

“Our goal is to inspire young people to play cricket. Changing the culture around cricket is something we can do as a team. We want to create a brand of cricket that people are excited about watching. Once people relate to that, that’s when you’re going to really attract the local black African player to play for the national team if they see this brand of cricket on TV.” 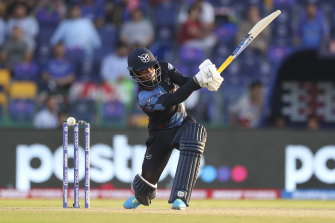 Namibia’s Pikky Ya France goes on the attack in the T20 World Cup match against Afghanistan in Abu Dhabi.Credit:AP

Pikky Ya France, who was the only black player in the team’s win against Scotland, also believes that the team’s success will inspire a change in cricketing culture in Namibia.

“We have been flooded with messages from back home and I really believe it has inspired the nation. Hopefully, more kids become interested in cricket. It’s more about exposure to the game because Namibia doesn’t have a cricketing culture. I am certain that we have made that difference.”

With their success, Namibia has also qualified for the 2022 World T20 in Australia and New Zealand, where they look forward to continuing to test themselves on the world stage.

“Australia is always a country that everyone would like to play in,” Muller said, “it’s a beautiful country. Most of our team is 26 or younger, so we believe that we will have a fairly consistent team.”

“I’m not sure how many of the guys have actually played in Australia before, so it’s something we look forward to,” said Ya France.

De Bruyn believes that for the team to have success in Australia, they need more experience against the top teams, especially in Australian conditions.

For Erasmus, the goal is to continue to showcase Namibia on the world stage and do the country proud.

“We’ll try to bring our story to Australia again. We are a very small but very proud cricketing nation that wants to be on the world stage and we will be that team in Australia that continues to fight above its weight.”

With Namibia’s next games against New Zealand and India, they will face challenges they have never seen before. The thought of facing Tim Southee and Trent Boult with the new ball or bowling to Virat Kohli and Rohit Sharma is enough to daunt any cricketer. Yet for Namibia, this is merely another chance to prove themselves against the very best. They have already surpassed everyone’s expectations.