Tim Paine was burnt by one spin great last season, and he is not about to start this one in a stoush with another.

Australia’s Test captain, who came off second best in a verbal exchange with Ravichandran Ashwin in January, has resisted the temptation to hit out at yet another googly from Shane Warne, one of his fiercest critics.

The leg-spin legend, who was never given the Test captaincy, lined up the Tasmanian over what he perceives as a lack of tactical acumen in the field and poor output with the bat.

Warne is not on his own on the first issue but may not have done his homework on the latter.

Of the 33 men who have kept wickets in the baggy green, only Adam Gilchrist and Brad Haddin average more than Paine’s 32.63.

Adopting a more attacking approach since a chat with wicketkeeping great Ian Healy during the 2019 Ashes, Paine is arguably in career-best form with the bat at Test level, averaging nearly 40 in his past two series. 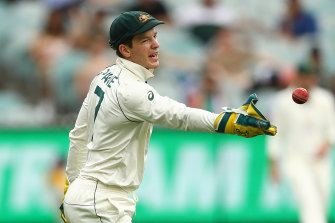 Richmond forward Jack Riewoldt went into bat for his radio co-host, saying Warne’s assessment was more fabrication than a critique, to which Paine said “potentially” but did not elaborate.

“I’m going to let it go Jack, to be honest,” Paine said on SEN Hobart.

“I will bite my tongue, I’ve got some things I need to concentrate on first. What I will say though is ‘Warney’ is obviously very opinionated and he’s happy to give his opinion.

“You guys are sitting in there now in the media and his job is to critique … I’ve worked in commentary in cricket, and I’ve worked on radio with you guys.

“Sometimes you need to give your opinion that people don’t like and might not necessarily agree with, but at the end of the day that’s his opinion and we’ll let him have it for now.”

Australia lost what appeared to be an unlosable series against a severely depleted India at home, despite emphatically winning the first Test in Adelaide. Paine defended his team’s performance, saying it had been difficult to play consistently well given how little Test cricket the side had played during the pandemic.

The men in the baggy green have played just one series since the end of the 2019-20 season, with tours to Bangladesh and South Africa postponed due to COVID-19.

“The other thing is, we’re not hiding from the fact we haven’t played our best Test cricket, there’s no doubt about that, particularly last summer [against India],” Paine said.

“The summer before that we won five-nil [against Pakistan and New Zealand], and we’ve had very, very little Test cricket.

“So yeah, there are some guys that are struggling for some continuity and some consistency, because Jack, if you played four games of footy in 12 months, you’re not always going to be at your absolute best.

“It can be difficult and this team has had some challenges that no other Australian team has, and we’re fighting our way through them.

“Sometimes you don’t quite play at your best, but we’re not hiding away from that and saying we are the best Australian cricket team or we’re dominant or playing as well as we’d like to.”

A dearth of match practice will be an issue again leading into the Ashes. Steve Smith, David Warner, Pat Cummins, Josh Hazlewood and Mitchell Starc will have their preparations compromised by quarantine upon returning home from the Twenty20 World Cup.

“We said that ourselves, we think we have plenty of improvement left, but we also think our best cricket is right up there,” Paine said.

“That’s what we’re trying to concentrate on, making sure we’re ready to go for the Ashes and this Test team can play its best cricket.

“But again, we’ve got some challenges with guys being at a T20 World Cup, coming home and doing two weeks’ quarantine in a hotel room without training and then having about eight days before heading into the first Test.

“It’s going to be a challenge not just for us but for England, but yeah there’s some challenges that international sportsmen are facing that others haven’t had to in the past.”