Gerry Van Ameyden and Ben Koster could only watch and wonder what it all might mean for them as they watched Giga Kick storm home to win the $15 million Everest at Randwick on Caulfield Cup day.

The pair stood, relaxed but with minds racing in the mounting yard as the Caulfield Cup was run and won by Durston while Sound, the veteran horse Van Ameyden part-owned, ran into ninth.

A fortnight earlier they had watched Buenos Noches, a horse they part own with a big bunch of friends, push Giga Kick to the line in a fiercely contested Danehill Stakes for Matthew Smith’s stable at just his fourth start. 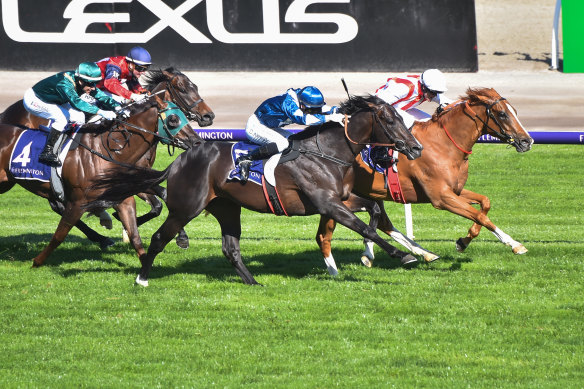 Giga Kick holds off Buenos Noches in the Danehill Stakes a fortnight before winning The Everest.Credit:Racing Photos

By Supido and out of Koi, he had already shown toughness in each of his runs, winning on protest at his first start down the Flemington straight when he kept coming after suffering interference.

What each race confirmed was that Giga Kick was, as Smith had heard before they met, a genuinely good horse. And it provided a welcome reminder that they might be racing a fair sprinter themselves in Buenos Noches, a horse that was purchased from the Widden roster through Inglis for just $40,000.

Smith had watched the race with the words of form analysts in his ears. They had told him simply “don’t be disappointed if you run second to Giga Kick”, which eased any pangs of frustration.

“I was pretty happy to get that close to him and thought I have got a good horse on my hands,” Smith said.

The Coolmore Stakes will show just how good when he takes on a crack field in the $2 million group 1 with In Secret, Jacquinot and Grand Impact his main rivals. In Secret, the Godolphin runner, was a $900,000 purchase, while the Widden Stud purchased Golden Rose-winner Jacquinot before the Everest in a multimillion-dollar deal.

Smith, who grew up in Wangaratta but is making a name for himself as an emerging trainer at Warwick Farm in Sydney, is under no illusions. He suspects the way the race is run, and luck in running, will play a large part in which horse hits the line first in the Coolmore Stakes.

He sees possible improvement in Buenos Noches as he wandered around the track in the Danehill Stakes.

Smith is also interested whether a fifth start this preparation will be too much for Buenos Noches to show his best, or whether he will keep performing as he shows no signs of slowing down in training.

“He is a very uncomplicated horse. He just turns up in the morning, works and eats up,” Smith said.

“We have a nice horse on our hands. It’s his first racing prep and he is going super.”

Smith is also hopeful his other runner at Flemington, Nimalee, will give a good account of herself in the Empire Rose Stakes. Smith is here to win, but he is also in Melbourne to share the fun.

“I love having a few runners down here over the carnival. They are just bloody hard to win, that’s all I know,” Smith said.