Jai Hindley has etched his name into cycling history, becoming the first Australian to win the Giro d’Italia.

The Giro is Italy’s version of the Tour de France and the 26-year-old finished the 21st and final stage of the three-week race – a 17.4km time trial in Verona – on Sunday safely to seal the historic victory, which has put him in the same league as Cadel Evans. 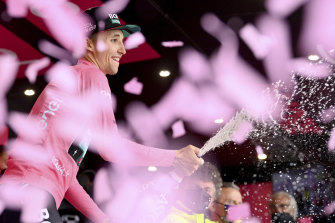 Evans, who won the Tour de France in 2011, is the only other Australian to have claimed of cycling’s highly revered three grand tours – the Giro, Tour and Vuelta a Espana.

Hindley entered the 21st stage with a healthy one minute and 25-second advantage on his primary rival Richard Carapaz (Ineos Grenadiers), who lost the pink leader’s jersey on Saturday’s penultimate stage in the Dolomites. There, Hindley and his Bora-hansgrohe team turned a three-second deficit to the then race leader into a one minute and 25 second advantage with an all-in performance on the upper slopes of the summit finish at Marmolada.