In what is fast becoming the best couple of months in his career, metropolitan trainer Greg Hickman is eyeing off another double at Tuesday’s feature Nowra meeting.

The Warwick Farm-based horseman has landed eight winners at six different venues from his last 21 runners for a high class 40 per cent winning strike rate. 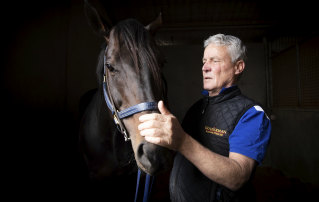 The latest came in the Randwick mud on Saturday when vastly improved three-year-old American President went to the grandstand rail and duly launched home by more than five lengths in a Benchmark 72.

And ironically it was that same flashy galloper by Starspangledbanner who helped the stable light the winning fuse only a month ago.

At Goulburn on March 18, American President easily won a Class 1; while improving three-year-old stablemate Unwritten bolted in her maiden from well off the speed.

A week later at Wellington, the Hickman camp added another double with Vancouver Khan claiming a Class 1, and Inside Trader storming home to win a BM 66.

Three days later he was back in the winner’s circle at Queanbeyan with lightly raced five-year-old and impressive maiden winner Good Deed.

Then on April 6, American President revelled again in heavy ground to bolt in a BM 68 at Canterbury before Mr Cheeky won his maiden at Nowra on April 17, and the “President” returned in emphatic style at Randwick.

Back now on the South Coast where many city stables like to travel, Hickman will be confident with tough and hard fit three-year-old Packer who lines up in a Maiden Hcp over 1400m.

One of many wet track performers in his yard by former top sprinter Written Tycoon, Packer is banging the door down after beating all bar the winner in two strong efforts at Mudgee and Muswellbrook.

The stable then has Unwritten returning in a Class 2 Hcp over the mile after chasing home a smart winner at Mudgee 23 days ago.

The Warwick Farm invasion doesn’t stop with Hickman. The Gary Portelli yard saddles up progressive filly Amazing Nicci fourth-up in a very winnable Class 3 over 1000m, while Bjorn Baker has promising filly Sinaloa well-placed in a Benchmark 58 over 1200m to close the meeting.