There are Group 1 ambitions this spring for lightly raced three-year-old Owen County but trainer John Sargent is keeping first-up expectations on the low side for his return at Kensington on Tuesday.

The gelding won two of his first four starts in his first preparation and was tried in the Group 1 JJ Atkins in June so given his staying potential Sargent concludes he overachieved. 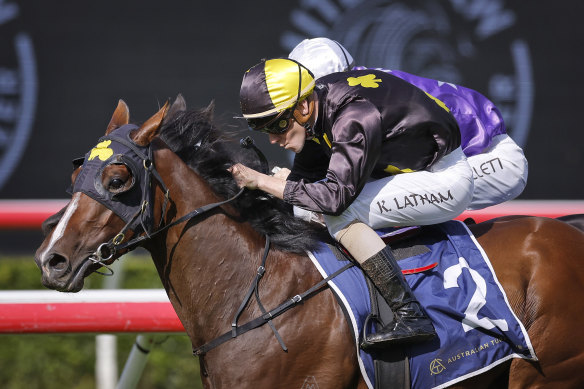 Keagan Latham wins on Owen County in the Precise Air Handicap at in May.Credit:Getty

Although both of Owen County’s wins are at distance of the Vale Alan Osburg Handicap (1400m), including his debut, the trainer warns that unless a heavy track is posted, he might find it a bit slick this time around.

“It’s a start off point to get him to the Spring Champion Stakes and the Derby,″⁣ Sargent said.

“It’s over the road and the way he’s been trialling he’s looking for a mile now. He’s a lot more relaxed this time and mentally more mature from that trip to Queensland.

“I wouldn’t say he will be in the money but as long as he’s strong through the line I’ll be happy. I said to the owners I don’t think he will be competitive until he gets to a mile.”

Owen County’s two barrier trials have been far from eye-catching.

Sargent said that doesn’t concern him too much at this stage of the preparation and while the set-up may not be perfect first-up he regards the gelding as a promising stayer in the making.

“If they go really hard he might hit the line better than we think,” he said. “I think he is a nice Dundeel with plenty of upside and once he gets over a trip we will see his best.”

Sargent is a little more bullish about Pink Ivory’s prospects as she tackles the Bowermans Handicap (1550m) first-up since contesting the ATC Oaks.

The mare finished midfield in the Oaks after a solid fifth in the Group 1 Vinery Stud Stakes and Sargent said not to any attention to the fact she hasn’t beaten a horse home in her barrier trials leading in.

“She galloped well very on Saturday and if they run hard she will be getting right at them late.”

Supplied by Racing NSW.
News, results and expert analysis from the weekend of sport sent every Monday. Sign up for our Sport newsletter