Matthew Wade has come to Australia’s rescue to help lift his side to a thrilling four-wicket victory over India in the series-opening T20 clash in Mohali. 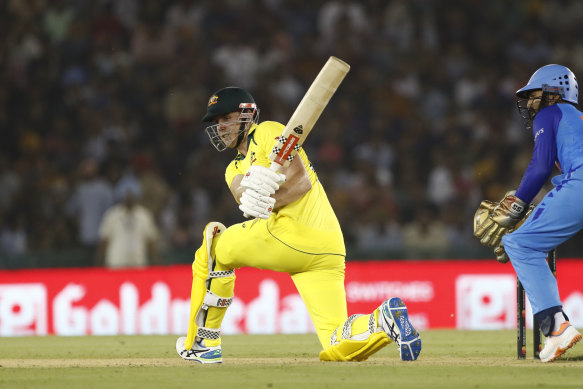 Cameron Green top-scored for Australia in the series-opener at the Punjab Cricket Association Stadium in Mohali.Credit:Getty Images

But Green’s departure sparked a collapse of 4-36 as India put the clamps on the run rate. Australia needed 55 off 24 balls to secure an unlikely victory when Wade came to the party.

Wade, the hero from last year’s semi-final victory at the T20 World Cup, smashed an unbeaten 45 off 21 balls to get Australia over the line with four balls to spare.

His knock included six fours and two sixes at a strike rate of 214.

Tim David (18 off 14 balls) also provided some handy runs in his partnership with Wade.

Plaudits for the victory must also go to Green, who produced a glorious knock to show selectors what they will be missing out on at next month’s T20 World Cup.

Green was a surprise omission from the T20 World Cup squad, but he didn’t let that affect him as he got Australia’s run chase off to a bumper start.

The 23-year-old smacked eight fours and four sixes to put the visitors on track for victory.

Green’s ability to adapt to the opening role and recover from ugly bowling figures showed he possesses maturity beyond his age.

The rising star finished with 1-46 off three overs with the ball, which included being hit for three consecutive sixes to finish India’s innings. Those late heaves ensured India’s total was their highest T20 score against Australia.

As good as Green and Wade were with the bat, India were made to pay dearly for a substandard display in the field.

They also failed to review an LBW decision that would have seen Green depart on 17.

Earlier, Pat Cummins and Green bore the brunt of the damage as opener KL Rahul (55 off 35 balls), Suryakumar Yadav (46 off 25) and Hardik Pandya (71no off 30) provided the fireworks for India. 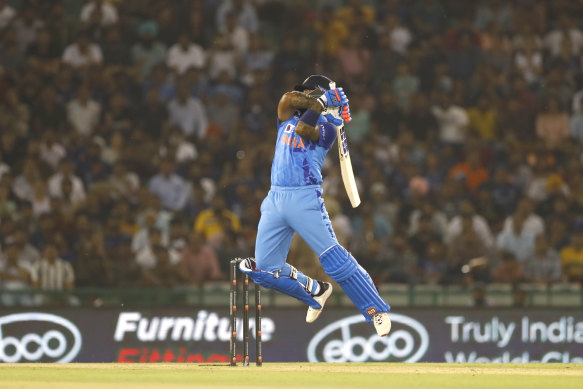 Suryakumar Yadav was in blistering form for India.Credit:Getty Images

Test skipper Cummins finished the match with figures of 0-47 off four overs, while spinner Adam Zampa (0-36) and Green also struggled.

Glenn Maxwell produced the highlight moment in the field when he saved what was on track to be a certain six in the 19th over.

Maxwell leapt in the air and over the boundary rope to produce a one-handed catch off Harshal Patel’s big hit.

Before he landed, Maxwell threw the ball back into the field of play, with India only scrambling through for a single instead of gaining six runs.

The second game in the series will be played on Friday at the Vidarbha Cricket Association Stadium in Nagpur.