The former Cricket Tasmania staffer who received explicit text messages and an image from Tim Paine in November 2017, formally contacted Cricket Australia the following year requesting first an apology, then an apology and the sum of $40,000 to cover her legal costs.

Representatives of CA were also handed a full printed copy of the explicit text exchanges and images by a representative of the former staffer in January 2019, almost three years before Paine’s tearful resignation as men’s Test captain. 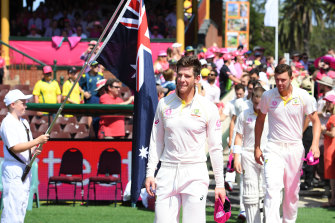 Tim Paine leads the Australian team onto the field during the SCG Test against India in January 2019.Credit:AAP

CA has confirmed to The Age and The Sydney Morning Herald that the staffer contacted the governing body multiple times in the second half of 2018, requesting an apology from Paine and money to cover her legal costs in an ongoing dispute with Cricket Tasmania.

The emails sent by the staffer to CA were addressed to Christine Harman, the organisation’s head of legal affairs, and shared with a select group of senior staff at the time.

In Harman’s response in early November, the request was declined on the basis that it was a dispute between the staffer and two employees of Cricket Tasmania, as Paine was not a CA contracted player at the time of the text exchanges in November 2017 on the night before and the morning of the first Test of that summer’s Ashes series.

However, as he was not only CA contracted but also the captain of the national team when the exchanges were brought to CA’s attention in May 2018, Paine was subject to parallel investigations by CA’s integrity unit and also Cricket Tasmania.

The meeting, in Sydney around the final Test of that summer’s series against India, meant that CA had been given every message between the pair and the explicit image that Paine had sent as he continued to captain the Test team between then and his last match as leader, against India in January this year.

A CA integrity investigation of the matter, which included a search of Paine’s phone, concluded in May 2018 that the 36-year-old had not transgressed in a manner that would bring a charge under its code of conduct.

Sean Mulcahy, who was contacted by the staffer’s then lawyer to set up a meeting with CA because of his association with cricket, described what took place.

“I provided a full copy of the text conversation with Tim Paine, including the pictures that were sent,” he said. “I indicated that it was her intention to keep the matter private and that she was seeking an apology from Cricket Tasmania and her legal fees reimbursed. I was subsequently contacted by Christine Harman at CA, advising that no mediation would take place. That was my last discussion with CA.”

The emails also mentioned the possibility of the story being taken to media outlets, but the staffer eventually decided not to go through with that plan.

“I advised that her only remaining course of action through me was to take the matter to the media,” Mulcahy said. “I told her that given the impending Ashes series, the severe fallout from the South Africa incident and subsequent sacking of then captain Steve Smith, that she could possibly command a large fee for her story. Her ultimate decision was to let the matter go and move on.

“It was always my understanding that she never wanted this matter to become public. She turned down the possibility of a big pay day to tell the story, yet she chose to stay quiet. I don’t believe she is the source of this story now being made public.”

The former staffer is currently in court facing charges of theft related to her time at Cricket Tasmania, allegations that she denies.

Shannon Tubb, another Cricket Tasmania employee and Paine’s brother-in-law, who the female staffer also complained of being sexually harassed by, had his contract terminated in a confidential agreement with the state association also in 2018.

Paine, in a shared interview with his wife Bonnie in the Sunday Herald Sun, said that he always had a feeling that the fact of the text exchanges and explicit image would get out into the public arena eventually.

“I thought the issue was dealt with, but it always popped up around a big series, or at the start of the cricket season,” he said. “Over the last three years, there have been numerous times where media agencies have put to us that they had evidence, yet they never chose to write it.

“As to why, I’m not sure, but nobody else had chosen to write the story, but I knew it was going to come out at some point, as much as I didn’t want it to.”

Bonnie Paine described her mix of emotions when dealing with the issue. “I was shocked. I remember feeling angry because we had a little girl that wasn’t too old,” she said. “At the same time, Tim and I had been in a long relationship, it’d been 10 years, and God knows we had had our ups and downs, and I don’t claim to be perfect, but I was still completely rocked.”