‘She is in great form and I’m very happy with her’: Trainer Richard Fahey backing speedball filly The Platinum Queen to strike gold on soft ground in the Flying Childers Stakes

Trainer Richard Fahey is backing The Platinum Queen to cope with the softest ground she has ever encountered when the speedball filly lines up in tomorrow’s Flying Childers Stakes.

Oisin Orr’s mount has only ever raced on good to firm going which has allowed her to show her electric pace, winning at Glorious Goodwood in an exceptional time before blazing a trail in the Group One Nunthorpe Stakes at York against older opponents, when she beat all but the in-form filly Highfield Princess.

The ground on Doncaster’s Town Moor is currently good to soft but there are thundery showers in the forecast which Fahey described as ‘hit and miss’. 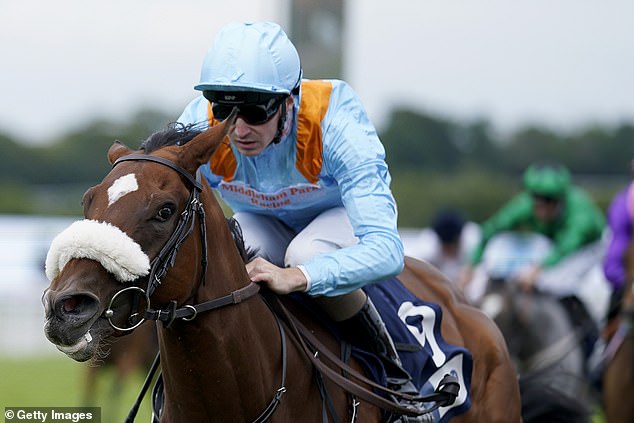 The Malton-based trainer said: ‘I wouldn’t say I am worried about the ground but she has never run on soft and I would not want it to get too heavy. She is in great form and I am very happy with her. We were delighted with her in the Nunthorpe and she was beaten by a filly who is in unbeatable form at the minute.’

The Platinum Queen faces seven opponents which include the Richard Hannon-trained Trillium, who was an impressive winner of the Molecomb Stakes at Glorious Goodwood on his previous start.

The Platinum Queen is owned by Middleham Park Racing and their light blue silks may also be carried in the same race by the Keith Dalgleish-trained Prince Of Pillo, unbeaten in his last two outings. However, if too much rain arrives for Pat Dobbs’s mount, he could be pulled out to run at Ayr next week.