An oft-quoted statistic in the moments after England were razed for 68 to surrender the MCG Test by an innings and the Ashes in 11 days was this: the series was alive for three days fewer than the tourists had to quarantine upon entering Australia.

Those 14 days sequestered on the Gold Coast symbolised the fact that Joe Root’s team, for all their hapless displays over these past three Test matches, have at least done one thing worthy of praise in the time of COVID-19. They turn up. 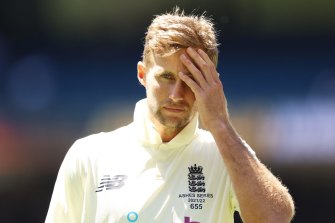 Twenty-one times England have taken the field for a Test match since the onset of the pandemic, nine of those games played overseas. Australia, for all the glory of watching the Gulidjan Scott Boland destroy the tourists on the third morning in Melbourne to win the Johnny Mullagh Medal, have now played seven Tests in that time, all on home soil.

So, the relative strengths and weaknesses of the Australian and English systems must be viewed against this disparity, as much as, in the shadows of this MCG slaughter, it may be hard to do so.

That context out of the way, however, and it is as clear as the gap between Root, James Anderson and the rest of the England side in terms of their 2021 performances that the squad visiting Australia is not just weakened due to questionable selections, tactics or unfortunate circumstances, like the difficult year Ben Stokes faced.

Systemically, England’s younger players are struggling to learn how to hone their games for Test matches in the early years after seismic changes to the domestic calendar, marginalising the county game in much the same way as the Sheffield Shield had to make room for the Big Bash League over a decade ago.

Look for a similar spot on Australia’s continuum after the BBL was introduced, and you find yourself somewhere around 2013, when the team then led by Michael Clarke went nine Test matches in a row without a win. It’s a deep hole to fall into at any time, let alone 2021 with all its “instant analysis” and hot takes.

Add the complications of COVID, not least England’s inability to play even a single completed warm-up game prior to the Ashes for the first time in anyone’s experience, and you have the recipe for something like the current 3-0 margin. That remains true even if accounting for how Australia have raised their game after the chastening experiences of last summer’s Indian heist.

Root, sounding weary as both captain and No. 4 batter after edging a questioning delivery into the Australian cordon for the sixth time in as many innings, was certainly willing to entertain the need for a wider conversation about English long-form cricket in coming months.

“There are some very talented players within this squad, and we have to just keep looking to find ways of upskilling ourselves, and each other, and managing pressure points within the game better,” Root said.

“That’s a big part of this game. It’s a big part that unfortunately, with where the game is at in our country right now the only place you can really learn that is in the hardest environment for what is quite a young batting group. They’re having to learn out here in the harshest environments.

“The environment that they’re coming from is not readying them well enough for Test cricket, and it’s a very difficult place, with everything that surrounds Test matches. It’s very difficult to improve in that environment. Maybe you look back at 2015 and the reset that happened in white ball cricket and maybe that’s something that needs to be happening in our red ball game as well.”

“They’re having to learn out here in the harshest environments.”

England had numerous ways in which they could have closed the margin of defeat. The decision to vest sole selection power in the coach, Chris Silverwood, has not gone well, raising the clear possibility of both a change in coach and return to a selection panel where ideas and players can be more robustly debated. Tactics, too, were too often a bad re-run of four years ago.

Undoubtedly, the absence of Jofra Archer hurt most of all. At his best in 2019, he was as influential a force as Stokes. Absent entirely this time, he left only Mark Wood to match Australia’s pace battery.

Root, while not countenancing any such discussion right now, will need to decide for himself whether he has anything left to offer as a captain of admirable batting skill but tactical limitations. Equally, the cons of passing the baton to his deputy Stokes, particularly right now, are as numerous as the pros.

Ultimately, though, the solutions to England’s troubles on this and the previous two Ashes tours go beyond the scoring of a few more runs, the taking of a few more wickets or the adjustment of bowling length or batting judgment around the off stump.

Having flipped the England system to a strong emphasis on white ball cricket, to the detriment of Tests, and then rejigged the domestic structure for reasons of commercial return and audience size, the England and Wales Cricket Board (ECB) must consider recalibration. Not least because too many of the best talents in the current system have scant interest, and insufficient incentive, for the hard graft required of Test cricketers.

Otherwise, the legacy of some of England’s greatest ever cricketers – Root, Stokes, Anderson, Stuart Broad – will be intertwined with the slow evolution of the men’s Test program into something like Monty Python’s Contractual Obligation Album.