‘Top sportsmen are focused… I like other things as well’: Epsom Derby hero Richard Kingscote is just as happy on his adrenaline-pumping 600cc Yamaha motorbike – or plumbing in a new bath – as he reflects on the greatest ride of his career

It is not what you expect to be saying when you visit the home of a sportsman in the aftermath of the greatest moment in his career but Derby-winning jockey Richard Kingscote is one hell of a plumber.

Of course there is chat about the 35-year-old’s Epsom win on Desert Crown on only his second Derby ride — more of that later.

But Kingscote is equally proud as he gives me a guided tour of the two bathrooms he personally transformed earlier this year —plumbing in the toilets, bath and showers, doing the tiling and grouting and throwing in some under-floor heating for good measure. 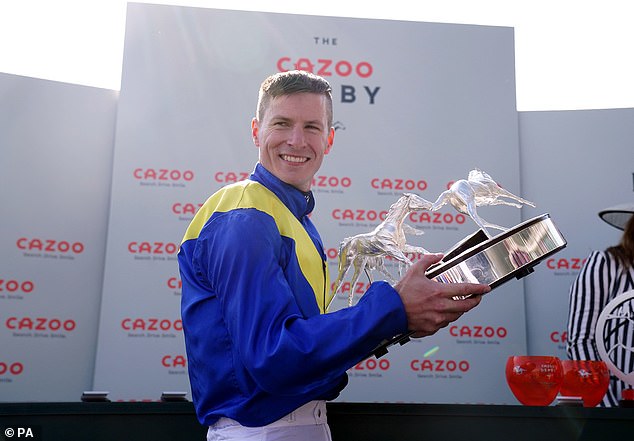 Laurence Llewelyn-Bowen eat your heart out. The stylish en suite wet room and bathroom would grace any episode of Changing Rooms and Kingscote completed them alongside his day job at a fraction of the price it would have cost him and wife Ashleigh had they called in the professionals.

Kingscote’s interests out of the saddle are not confined to how to handle a pipe bender and tile cutter. He is equally at home flying around a motor racing track like Oulton, Snetterton and Andalucia in southern Spain at 150mph on the 600cc Yamaha track bike in his garage.

It is different from the standard patter you tend to get about tunnel-vision obsession with a sport but Kingscote believes that his wider interests are diversions that make him a better jockey.

He also has a young Rottweiler called Pepper that he is training, albeit with an acknowledgment that he will not be entering the obedience class at Crufts just yet. 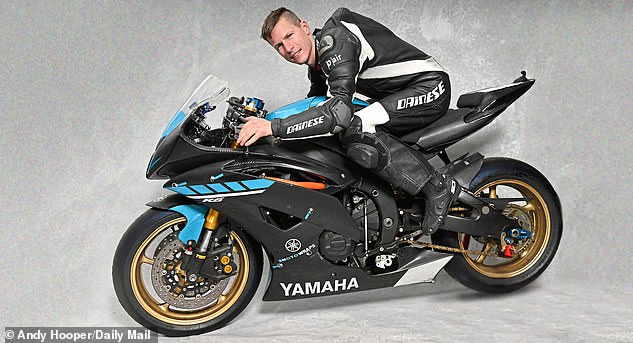 The jockey has interests outside of racing, including high-speed motorbikes like his Yamaha

‘Top sportsmen are very focused. It is not that I am not. I like other things as well,’ says the jockey who also landed a treble at Chester on Saturday.

‘That’s why I quite like track days. When you are riding the bike you have to be concentrating. If you are racing or sat in the car going to the races you are always thinking about horseracing — where am I going next, who am I riding for.

‘There is no real shut-off even if you do have a day off. I like the bike riding because you have to concentrate. It switches me off.

‘I always wanted a bike — all my brothers and sisters did and my dad had one when we were really little. It wasn’t until I was 19 or 20 that I my took my test and got my licence because at 16 I was flat out trying to be a jockey.

‘It’s not just the speed that is the attraction of the bike. It’s not that I don’t like it but I don’t half s*** myself if I am going a bit too quick coming into a bend! 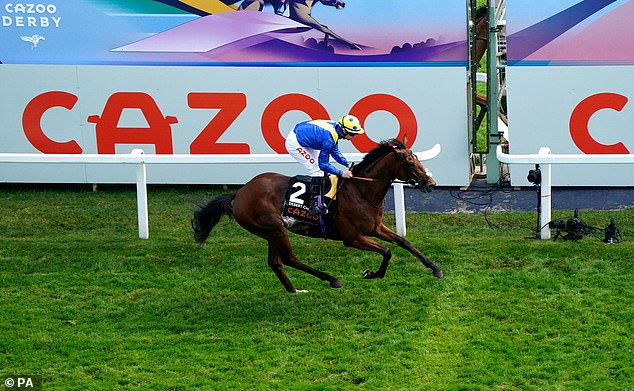 ‘You can always do better and I have improved my riding. I can improve again and I do have an itch that I will race it one day.’

In the aftermath of Desert Crown’s win at Epsom, Kingscote reckoned he might spend a chunk of his winnings on a new bike and last week on his way to ride at Nottingham he stopped off and had a sit on a Ducati Panigale.

The irony is that his greatest day in the saddle means taking risks — Kingscote admits he was grateful for his Air-Bag motor racing leathers when he ‘lost the back wheel and flipped it’ while bombing around Snetterton race track — might have to be put on the backburner for a little longer.

He has spent too long climbing the racing ladder to take any risks with his partnership with Sir Michael Stoute-trained Desert Crown, who was made favourite for the most important Flat race of the season after blowing away the field in York’s Dante Stakes.

Kingscote says: ‘I didn’t ride Friday and I was minding what I was riding before the Derby just to keep safe. The 10 days building up to the race, me and my agent were reasonably sensible riding horses I knew. 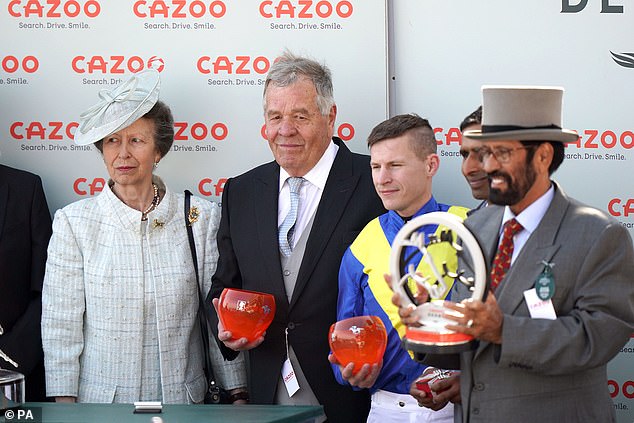 ‘I had a track day with my bike booked for the week before the Derby. As it happened I had the day off but once Desert Crown won at York, I thought, “I can’t do it”. So I didn’t.

‘I believed in the horse — I was just worried and thinking, “Don’t mess it up yourself”. I didn’t think of it as I had to win. I always put a bit of pressure on myself anyway so that is nothing new.’

And with the eyes of the sporting world on the Platinum Jubilee Derby, Kingscote, who has ridden more than 1,300 winners, nervelessly delivered.

Now there is talk of challenges for the King George VI & Queen Elizabeth Stakes and the Arc with a colt who has only raced three times and should also still be racing next season before a career at stud beckons.

It was a first British Classic, a first Group One win in this country and a long way from the beach near Weston-super-Mare where Kingscote got some of his early riding experience giving pony rides to young holidaymakers. 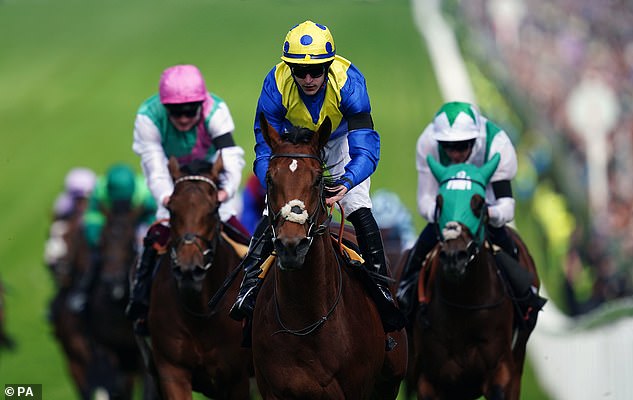 It was also in stark contrast to being replaced by Kieren Fallon on 2011 St Leger runner-up Brown Panther, the colt trained by Tom Dascombe and owned by former England footballer Michael Owen.

‘It was a kick in the teeth at the time but I didn’t seem to take it as badly as people thought I should have done,’ Kingscote recalls.

‘Tom was really upset when he told me so I knew it wasn’t his decision. It probably did me good in the long term because my agent and I knuckled down. I rode lots of winners and showed that I was able.’

Kingscote speaks fondly of Dascombe, who trained at Owen’s Cheshire stables until the end of last year.

He was retained by Dascombe until the start of 2021. Kingscote only gave up the role because with a young family — Ashleigh, and his children William and Sebastian — based near Newbury, travelling and staying three nights away from home most weeks had become untenable. 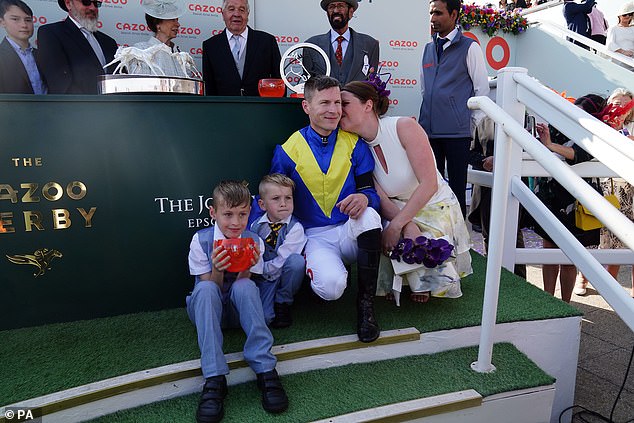 The offer to forge a stronger link with Stoute’s Newmarket stable was perfectly timed and even though Kingscote is understudy to Ryan Moore, the three-time champion’s commitments to Aidan O’Brien mean some pretty tasty crumbs like Desert Crown fall on to the Kingscote table.

Another will be Lights On, Stoute’s bet365 Mile winner that Kingscote rides in the Queen Anne Stakes, the first race at Royal Ascot on Tuesday.

‘I never expected that I would ride a horse like Desert Crown,’ he admits. ‘It’s nice my name is on that list of Derby winners. It is not something I ever expected.

‘No one is under any obligation to use me and it is Ryan’s job so I have no expectations but I imagine I will still ride Desert Crown. I am excited to see what this horse can do. He is exciting and I have a big old mortgage. Hopefully he can help with that!’

The unbeaten colt might just have pushed back by a few more years Kingscote’s ambition to race his bike.

Richard Kingscote is an ambassador for SBK