David Warner demonstated his prowess in the field once again to produce a stunning piece of athleticism to prevent a near-certain six against Sri Lanka on Tuesday.

Warner, 35, was ineffective as Australia suffered a humiliating defeat by New Zealand in their World Cup opener on Saturday, and Aaron Finch’s side are desperate for a win to keep their hopes of progressing to the semi finals alive.

And on a tricky pitch in Perth, saving runs will be crucial for Australia’s chase after they put their rivals into bat. Warner set an impressive example in preventing a Dhananjaya de Silva effort from crossing the boundary. 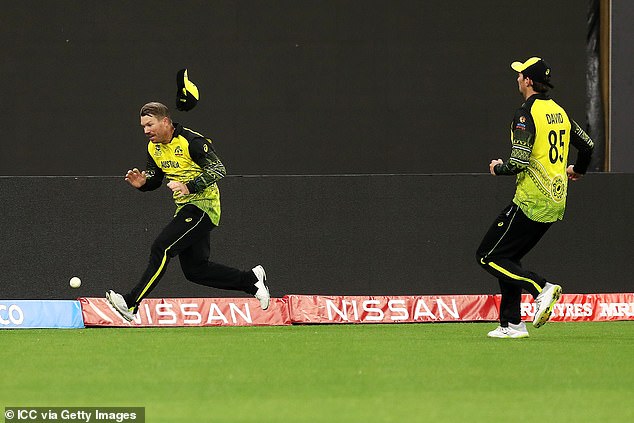 Slogging Marcus Stoinis into the Perth sky, the ball looked to have beaten Warner as he chased towards the fence in what appeared an effort in vein.

However, diving forwards, Warner plucked the ball from the sky before hooking it behind him to stop a six being scored and the Sri Lankans had to settle for two runs.

Warner’s effort did not go unnoticed by his teammates, with Stoinis offering a round of applause for his teammate’s heroic piece of fielding. 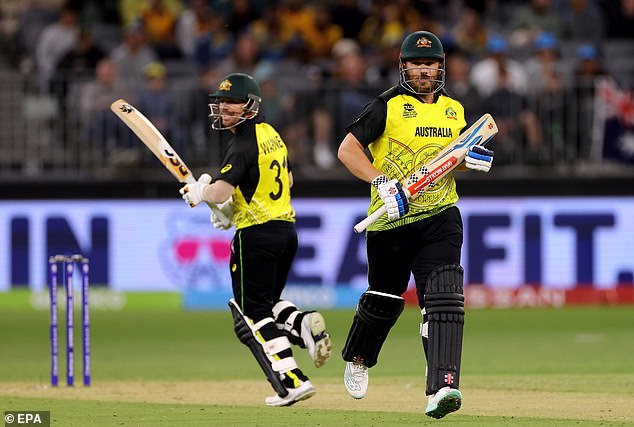 The opener was unable to make a huge dent in Sri Lanka’s total, making just 11 runs

The 35-year-old was called into action just moments later, this time dismissing Dhananjaya off of Ashton Agar’s bowling.

An expensive final over from Pat Cummins saw the Australians set a target of 158 runs to get on the board this World Cup, but David Warner was unable to make a significant dent in that figure, scoring just 11 runs before Maheesh Theekshana dismissed him.