Ever since the UAE and South Africa Twenty20 leagues reshaped cricket’s labour market with an influx of extra cash, this has been the constant question. 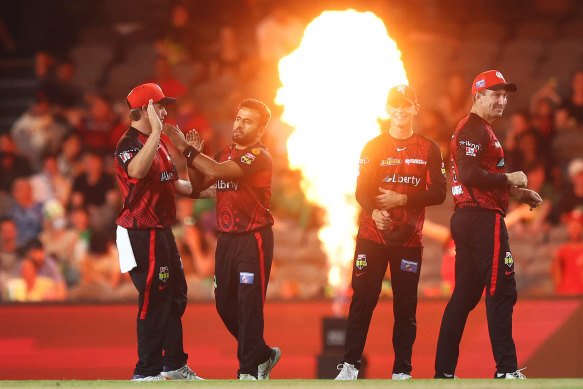 Challenged to raise its war chest for the Big Bash League by some $16 million next year, Cricket Australia’s chair Lachlan Henderson and his board, state chairs, the Australian Cricketers Association and their executives are consumed by how to wring extra dollars from somewhere.

It is abundantly clear that players are going to have to be paid significantly more than the current $1.9 million BBL salary cap. Most likely, that figure would have to double per club, with a marquee fund for especially valuable Twenty20 players thrown in.

All up, that would mean BBL salaries go up from about $20 million this season (including the extra money to overseas players in the tournament’s inaugural draft on Sunday) to at least $36 million. Should pay for women and centrally contracted Australia men also rise, the extra cash required for the 2023-24 season could jump to more than $30 million in total.

If that salary cap number rises, cuts are going to have to be made elsewhere, especially when there is a year’s lag between the signing of the next player pay deal in 2023 and the subsequent broadcast cycle starting in 2024 after the current $1.18 billion terms with Foxtel and Seven expire.

So where will the money come from?

Administrators have pointed to some parcels of money bound up in the Australian Cricketers Association’s 2017 deal with Cricket Australia, including the adjustment ledger worth about $70 million to be paid out next year. The players, logically, rebut this idea by explaining that the money is already theirs.

Other pots of cash include about $10 million unused money left in the player union’s grassroots fund, meant to be used to help clubs and junior competitions. At the same time, the union has looked at Cricket Australia’s books to come up with its own suggestions for where the money might come from.

But the state associations, having already lived through three consecutive years of reduced distributions due to COVID-19, are adamant that they will not surrender any more money.

The associations, it is constantly pointed out, signed a financial deal a decade ago that stressed they would not be worse off by handing over all match revenues and their associated risk to the central governing body.

They also insist, rightly, that state distributions are by and large passed down to cricket’s club and junior ranks, whether in capital cities or regional areas. While CA also does plenty of its own work in this area, reduced distributions effectively limit what a state can do within its borders to ensure as many people play cricket as possible.

One of the current debates is whether it would be possible to counterbalance grassroots funding, even temporarily, by charging more for junior and club cricketers to play the game, by way of subscriptions and other assorted fees like those for match balls.

On the surface, lining cricket up against other sports, this makes some degree of sense. But only as long as it takes to remember how much money must be spent on bats, pads, gloves, helmets and other accoutrements not required by soccer, Australian rules football or the rugby codes. Cricket is a pricier and more complex sport to play.

One of the current debates is whether it would be possible to counterbalance grassroots funding, even temporarily, by charging more for junior and club cricket subscriptions.

The other option is to pivot to private investment, either for BBL clubs, the BBL as a whole or CA’s commercial operations entirely. Investors would likely come from either the vast pool of rich Indian corporate conglomerates, or US-based private equity giants that already have financial interests in other sports.

That money, however, would be conditional on many things: the loss of Cricket Australia’s tax-free, not-for-profit status for one. Selling off a portion of “the farm” and its future earnings is a concept that still fills some decision-makers with a combination of dread for its implications, and pity for other sports that have had to go there.

There is optimism in most quarters that in 2024, the next set of Australian broadcast deals will bring in enough of a cash uplift to balance Cricket Australia’s needs to reward players while also investing back into the system that nurtures them.

But even there that familiar question is likely to rear its head once more. Who pays?

The surest way to raise more broadcast rights value is to place more cricket behind a paywall, much as the AFL is expected to do. Then it will not be Cricket Australia, the states or the players paying more, but the public they serve and perform for.