Segenhoe mare Miss Admiration continued a lifetime of outperforming her looks as she took a starring role at the Magic Millions Sales on Wednesday as her Not A Single Doubt colt brought a $1.7 million winning bid.

The colt is the top-price sale after two days and will find a home at the Ciaron Maher and David Eustace stables with a group of owners easily put together for the first son of Miss Admiration, which Segenhoe’s studmaster Peter O’Brien has loved and cared for the past year. 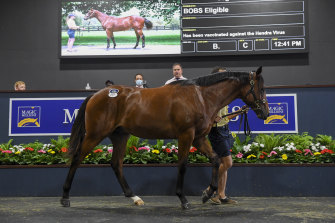 The colt from Miss Admiration x Not A Single Doubt was bought for $1.7 million on Wednesday (Lot 261).Credit:Darren Tindale – The Image is Everything

“She wasn’t the prettiest mare, but this colt was a cracker,” O’Brien said. “We had raced her with partners pretty successfully and when she finished [Segnehoe owner] Kevin [Mahoney] brought them out to breed from her and it’s a great result.

“She wasn’t my favourite mare, but she has produced as good of a Not A Single Doubt colt as you can see. It was my pick a long time ago.”

Mahoney was quickly to stay in the colt for a 10 per cent to continue to be part of the story.

“She is a mare that has always surprised people. She won an Adrian Know and was placed in two Oaks,” Mahoney said. “Peter told me this was the best colt we had and I wanted to stay in him.”

Maher was determined to make the purchase and fought off several big players to take the colt, which is part of the last draft of Not A Single Doubt and reminded him of Dubious, a Magic Millions Classic runner-up a couple of years back.

“There is a bit of Dubious in him, he was Not A Single Doubt out of a staying mare,” Maher said. “[Not A Single Doubt] tends to put that speed into them, I think he is the sort of horse that could get us back here next year.

“We’re pretty excited to get him. They obviously don’t make the Not A Single Doubts anymore and we’ve just had so much success with that breed.

“I knew, given how pricey they were last year, that he was going to be a colt on everyone’s lists, so I’m just rapt to be able to get him.”

The Magic Millions sale started to live up to its name after there was a ceiling at the seven-figure mark on the first day on Tuesday. On day two there were four seven figures lots, with two of them – a son and a daughter – from I Am Invincible. The super stallion’s progeny averaged a price of more than $600,000.

James Harron took home a brother to I Am Immortal, the I Am Invincible-Meliora colt bringing $1.1 million, while bloodstock agent Sheamus Mills continued to pick the best fillies from the Yarraman Park stallion. He was forced to pay $1.55 million for a sister to Najoom after paying $900,000 for an I Am Invincible filly out of Harlem River on Monday.

“We had them about equal on our list but this one took a bit more buying,” Mills said. “I said to my client ‘are you sure you want to keep going?’ a couple of times on her, but he just said we want to get the best fillies at the sale and I think we did.”

A Zoustar colt from the family of group 1 winner Instant Celebrity went to the Victorian Breeding Alliance for $1.3 million late in the day.

Meanwhile, Wyong Magic Millions winner Soaring Ambition will have to a second vet examination before being allowed to start in Saturday’s Magic Millions Classic after being found to have “a short striding gait on inspection on Wednesday.

Magic Millions Guineas runners Me Me Lagarde and Indiscreetly showed signs of soreness on inspection and will be re-examined by Racing Queensland vet later in the week, while Glorious Ruby will also face the vets again after being changed out of bar plates later in the week.