The apple never falls far from the tree, and his horses never wander too far from home.

It’s a recipe that can cook up a feast of success for the leading local stable at Tuesday’s feature Bathurst meeting. 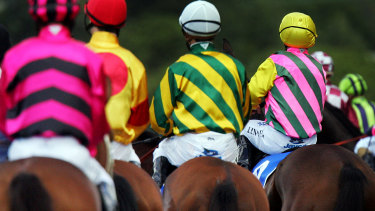 Racing returns to Bathurst on Tuesday with a seven-race card.Credit:Fairfax

Dean Mirfin, who admits the last month hasn’t been one of his best, is banking on a strong group putting his camp firmly back in the winner’s circle.

The Mirfin yard has only had two low-grade winners around the Central West of NSW since late May, but he saddles up a powerful team for the first meeting at Tyers Park since May 26.

And not surprisingly, his sole Class 1 winner that day – talented three-year-old Astrolith – is part of that team looking to turn back the usual wave of provincial and metropolitan visitors.

Astrolith, who won two straight in May to start a second prep, looks very well-placed to add a third scalp in a modest Benchmark 58 Hcp over 1400m, with emerging jockey Anna Roper taking 3kg off.

And among two other stablemate rivals, underrated mare Kimmylee is fourth-up and coming back from a Class 2 failure at Cowra.

In the highlight penultimate Benchmark 66 Hcp over 1800m, the Mirfin yard will be quietly confident aboard progressive Press Statement three-year-old Island Press third-up on an eight-day turnaround.

Having resumed with an even effort from well back in a much tougher CL3 Highway at Rosehill, Island Press did his best work late in a deeper BM 84 sprint at Wellington.

Naturally, he’s back up in weight dropping to this company, but still well treated after Roper’s claim, although he’ll have to be on his guard against tough seven-year-old Careering Away who has won his last two up to this level but drops back 600m in distance.

The Mirfin stable then aims to close out a big day in a Benchmark 58 Hcp over 1100m with consistent mare Arimathea fourth-up.

A dominant winner in similar grade at Cowra four runs ago before honest efforts against deeper opposition, Arimathea is not only drawn well but well weighted with 4kg claimer Olivia Chambers aboard.

But she faces a stern test from classy Warwick Farm three-year-old Cinque Torri who is part of another strong Bjorn Baker-trained team heading to the central west.