Twenty20 World Cup Champions Australia overcame an embarrassing batting collapse to claim a series victory over Sri Lanka in Colombo as Matthew Wade once again proved his value as a finisher.

A second dominant bowling display in as many days strangled Sri Lanka’s batting, suggesting another easy run chase, but it took an unbeaten 26 from Wade for Australia to claim victory by just three wickets with 13 balls to spare on Thursday morning (AEST). 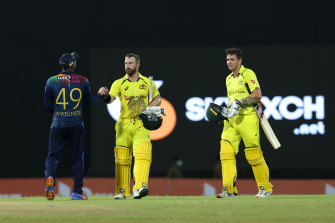 Chasing Sri Lanka’s inadequate 9/124 in the second game of the three-match series, Australia made a bright start before losing 7/66. Recalled tailender Jhye Richardson (9 not out) hung on for six overs with Wade as Australia scrambled to 7/126.

Richardson was playing because Mitchell Starc needed six stitches in his left index finger after a freak accident catching it on a boot spike during his follow through in the opening game.

Australia’s specialist Twenty20 wicketkeeper, Wade does not have a Cricket Australia contract but proved an invaluable finisher during Australia’s unexpected T20 World Cup win last October and November and proved so again.

Kane Richardson, who claimed career best figures of 4-30, including three wickets in Sri Lanka’s final over, insisted there was no panic in the Australian dressing room, and said he was looking forward to batting next. 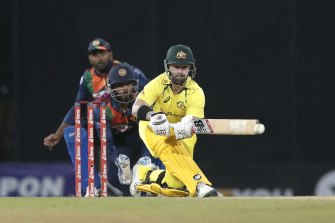 “As a group everyone is so calm in that situation,” Richardson said. “We needed about three an over for 10 overs so most of the time you get the job done. I was actually looking forward to having a hit and getting a little not out, but the boys got the job done to wrap up the series and take the pressure off the last game.”

Steve Smith retains a tenuous grip on his place in the national T20 team.

While Smith was playing his first innings since the Test series in Pakistan last March, his five from four balls is a continuing pattern in T20 cricket which saw him overlooked completely for the most recent IPL.

An all-time great in Test cricket with a strong one-day record, his T20 figures tell a different story.

In 56 matches he averages just 25 and has a strike rate of only 125 with four half-centuries. This compares to his new rival for a place in Australia’s T20 side, Inglis, who was unlucky to miss out to Smith in this series.

Smith under-performed in Australia’s surprise Twenty20 World Cup victory last October and November and has a top score of just 14 in his last five T20 internationals.

Inglis has played six T20 matches for Australia since his T20 international debut in February, scoring 179 at an average of 36 and strike rate of 145.

A day earlier Australia had bowled Sri Lanka out for just 128, winning the first game by 10 wickets with six overs to spare thanks to rampant half-centuries from David Warner and Aaron Finch.

They looked on course to do the same again as Finch raced to just 24 from just 13 balls before being caught high at cover trying to go over the top again, leaving Australia 1/33 from just 2.4 overs.

Australia reached 1-53 halfway through the fifth over when Mitch Marsh (11 from 7 balls) was lbw attempting another lusty sweep shot.

Smith turned a lovely four off his legs from Nuwan Thushara but missed the next ball, was adjudged lbw, and lost the review.

Frowns began to form when a rampant Warner (21 from 10 balls) came charging back for a second run only to find Glenn Maxwell was not interested.

Warner was run out by half a pitch then Marcus Stoinis (9) and Maxwell (19) both holed out and a romp became a gripping contest.