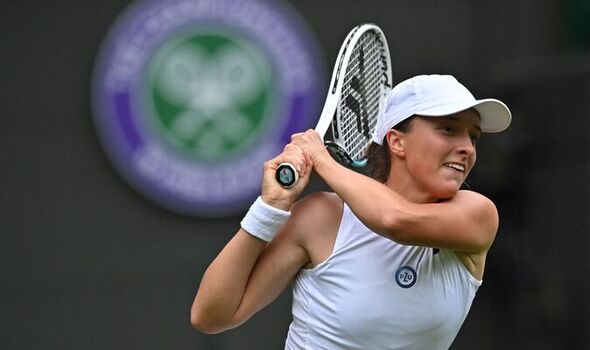 Iga Swiatek has called for tennis’ governing bodies to unite in their decision over Russian and Belarusian players after admitting the fallout from Wimbledon’s ban announcement was getting “more and more chaotic”. The world No 1 has been showing her support for Ukraine by wearing a blue and yellow ribbon during her matches but admitted she didn’t know what was the right decision.

After Wimbledon announced they were banning all Russian and Belarusian players from The Championships with the LTA following suit and extending the ban to their British grass-court tournaments, the ATP and WTA both released statements condemning the move. They are now meeting in Madrid to discuss sanctions for Wimbledon and the LTA, but the WTA world No 1 has called for tennis’ governing bodies to come together.

“The situation is getting like more and more chaotic, I would say,” Swiatek admitted, speaking in Madrid where she was forced to withdraw with a shoulder injury but still completed her media duties. “But I feel like it would be nice to have all these bodies making the proper decision so that we’re not going to have that kind of chaos.”

The 20-year-old who has won her last four tournaments in a row – Doha, Indian Wells, Miami and Stuttgart – also said she felt as though pressure had been put on the players themselves to come up with a solution for how to treat Russian and Belarusian players on tour. She added: “I feel like people are expecting us players to make the decision, but it’s pretty hard for us to make one because we know these people. We know each other. We are spending so much time on tour that it feels like we’re family.”

The ATP, WTA, ITF and four Grand Slams had all united in their decision to make Russian and Belarusian athletes compete as neutrals when the war in Ukraine first began, and also banned both nations from the Davis Cup and Billie Jean King Cup – where Russia is the defending champion of both ‘world cups’ of tennis. But the ATP and WTA are now considering stripping Wimbledon and the LTA events of all rankings points to render them exhibition events as a sanction for the ban.

Swiatek also said: “For sure it’s a tough situation and that’s why I think the actual people who are responsible for making this decision, they should make one decision that is going to last.” But the 2020 French Open champion herself did not know the best course of action, admitting she needed to educate herself better but wanted to see any decision contribute to stopping the war.