‘He is a very dangerous player’: World No 1 Carlos Alcaraz hails Jack Draper after the Brit nearly causes a huge upset and gives him a scare in three-set thriller at the Swiss Indoors tournament

World No 1 Carlos Alcaraz tonight became the latest player to find out that Jack Draper is a force to be reckoned with before edging him out at the Swiss Indoors.

In what was their first — but definitely not last — encounter, Alcaraz was given a major scare by the 20-year-old from Surrey.

The recent US Open champion shaded it 3-6, 6-2, 7-5 in Basel, but not before Draper had showcased the skills that have made him one of the fastest risers of the season.

Draper, who had received treatment from the physio and doctor, looked down and out trailing 4-2 in the third set, before reeling off three games to put himself within range of a significant upset in a first round of high quality. 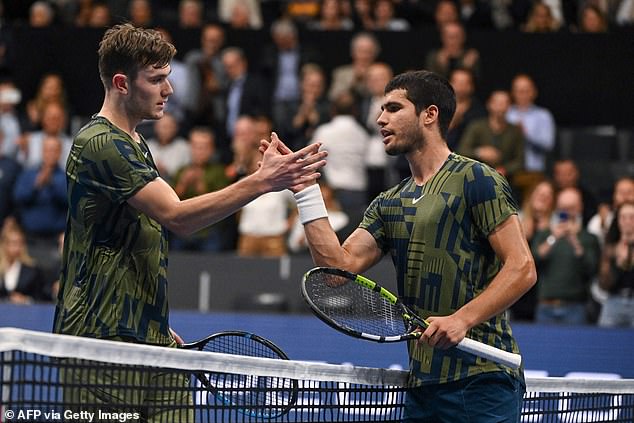 At 5-5, the Spanish phenomenon broke him — but was still pushed all the way when he tried to serve it out against the strapping 6ft 4in lefthander.

It was more than the booming serve of the British No 3 that caused him problems all evening, and Draper took advantage of some wayward forehands to break the Spaniard twice in the first set.

‘I knew he was playing great and that he is a very dangerous player,’ said an impressed Alcaraz.

Andy Murray is also playing this tournament in Roger Federer’s hometown. Britain’s Cam Norrie and Dan Evans are playing in the concurrent ATP 500 tournament in Vienna before they all converge on Paris for the final Masters level event of the year. 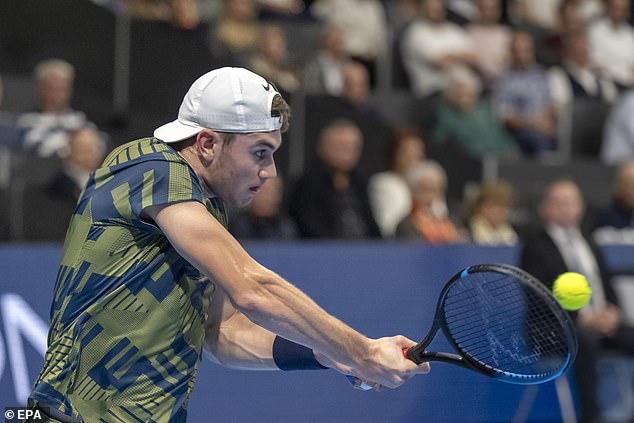