Highlights from day nine of Wimbledon

Wimbledon star Daria Saville has revealed she was forced to ‘skip her period’ because of the strict all-white dress code whilst competing at the famous tournament. The historical all-white dress code has been implemented at the event since the 1870’s but is often criticised for being out-dated.

According to the Wimbledon rule book: “Competitors must be dressed in suitable tennis attire that is almost entirely white… white does not include off-white or cream.” This ruling has often proved a problem for female players though, as outlined by Saville.

Whilst the Australian star said she was still a fan of the iconic look, she did admit that he does pose problems for herself and her peers. She told The Daily Aus: “Recently just being at Wimbledon, I was talking with my friend saying that I love the all-white look, but then a few girls said they hate it because it sucks to wear all white while being on your period.”

Going on to reveal she had to skip her period, Saville added: “It’s true, I myself had to skip my period around Wimbledon for the reason that I didn’t want to worry about bleeding through. We already have enough stress.” 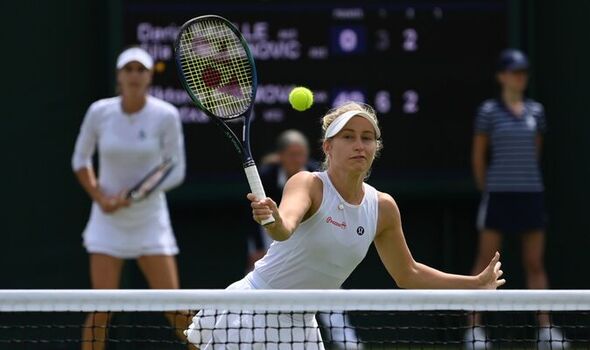 The world No. 98 also revealed she had suffered period problems whilst out on the court before, when competing in her first ever home slam at the 2013 Australian Open. Speaking on Instagram she wrote: “One time I got a period mid-match.

I went to the bathroom and then was like, ‘Oh, surprise!’ We are only allowed two toilet breaks during a match. Thank God I had a female umpire. I explained to her what is happening and then I waited for someone to bring me a tampon because I didn’t have any.  It was also 38 degrees on that day; that’s why I said it sucks to be a girl sometimes.”

Former star Monica Puig also addressed the matter on Twitter, describing the thought of coming on your period whilst wearing white at Wimbledon as a ‘mental stress’. She wrote: “Definitely something that affects female athletes! Finally bringing it to everyone’s attention! Not to mention the mental stress of having to wear all white at Wimbledon and praying not to have your period during those two weeks.”

Saville is not the only player who has been forced to skip her period at this year’s tournament, after British star Heather Watson also did the same. She said: “I’ll probably go on the pill just to skip my period for Wimbledon. That’s the thought process and conversations that girls have about it.”