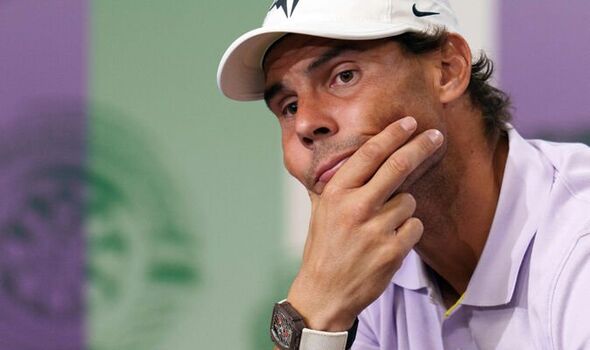 The All England Lawn Tennis Club have released a statement in reaction to Rafael Nadal pulling out of his Wimbledon semi-final against Nick Kyrgios. An abdominal muscle injury has meant that Nadal has ruled himself out of facing Kyrgios on Friday, meaning the Australian is straight through to the final.

The Spaniard had been seeking his third Grand Slam of 2022 and his 23rd overall, with Cameron Norrie facing Novak Djokovic in the other half of the draw. But Nadal’s quest to add to his tally of Majors and his ambitions to win the Calendar Slam have been wrecked by his stomach muscle problem.

Reports on Thursday suggested the 37-year-old two-time Wimbledon champion has suffered a 7mm tear in his abdomen. And he confirmed in a press conference later the same day that he would not be playing Kyrgios in what would have been a thrilling semi-final showdown on Centre Court.

The AELTC said in reaction to the news: “We extend our sympathies to Rafa Nadal on his withdrawal from the Gentleman’s Singles semi-final. We appreciate how hard he has worked to be fit to compete, and wish him well in his recovery.

“We now look forward to an exciting semi-final tomorrow and finals weekend ahead, and to seeing Rafa back at Wimbledon in the future.” It is the first ever instance in which a player has been given a walkover from the semis directly into the final.