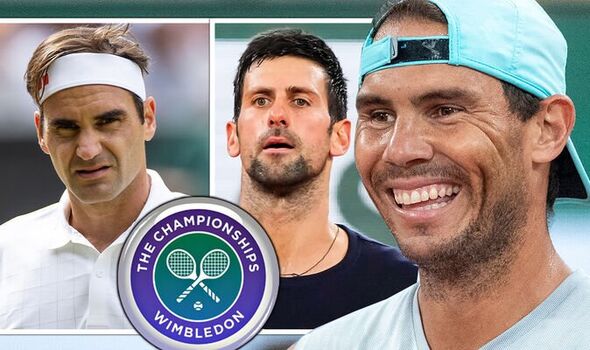 The ATP and WTA’s decision to remove all ranking points from Wimbledon has sent shockwaves throughout the tennis community, with some players now opting not to compete without any points on offer. But the decision also comes with some consequences for the likes of Novak Djokovic and Roger Federer, who will take huge hits to their rankings, while players like Daniil Medvedev and Alexander Zverev could benefit from the decision and reach their career-highs.

As well as taking away all ranking points on offer at The Championships this year, the ATP and WTA will also be removing the points that players earned at Wimbledon last year, meaning those who progressed the furthest will lose more points and be more hindered than those who failed to get past the early rounds. Express Sport takes a look at the players who will be hit hardest by the controversial move, and those who can benefit from the loss of last year’s points.

Who will be hit hardest?

As the defending champion, Djokovic has the most to lose with 2,000 of his 8,660 points coming from his 20th Grand Slam win at the All England Club last year, and is almost certainly set to be overtaken by Medvedev for the world No 1 spot, while even Zverev could surpass him and force the Serb to drop down to No 3 in the world. Even at the current French Open – where he is also the reigning champion – he is unable to add to his current tally after earning the maximum 2,000 last year. And it will be the second time this season that he will lose 2,000 Grand Slam points out of his control, after being deported on the eve of the Australian Open which left him unable to attempt to defend his title.

Federer is one of the players still benefiting from his Covid pandemic ‘best of’ points tally, which allowed players to keep whichever amount was the highest out of either 50 per cent of points earned in tournaments in 2019, or 100 per cent of points earned in tournaments in 2021. He reached the quarter-finals last year but made the final in 2019, meaning half of his points for being a finalist remain on his ranking, but they will be removed when the tournament comes around this summer. And as the Swiss star ended his season after Wimbledon last year, it means he will cease to have a ranking with zero points to his name when the 600 from the 2019 final are finally taken off.

23-time Grand Slam champion Williams is in the exact same boat as Federer – she has been injured and out of action since last year’s Wimbledon tournament, meaning when her points are removed, she too will no longer have any ranking or any ranking points. The 40-year-old is also still holding onto her 2019 finals ranking points after retiring injured just six games into the first round last year when she slipped on the Centre Court grass.

Berrettini reached his first and so far only Grand Slam final last year, earning 1,200 ranking points which will be removed in less than two months’ time. The Italian has been sidelined with injury since reaching the last-16 in Indian Wells in Mach , having a “minor operation” for his hand shortly after, and recently confirmed he would be making his comeback during this year’s grass swing. And the removal of points from Wimbledon arguably hits the current world No 10 harder than most, as he has already been losing his points from the entire clay season last year.

Nadal was unable to play Wimbledon last year after his chronic foot injury flared up in his French Open semi-final loss to Djokovic, leaving him unable to play at all for 20 days. While the removal of points from this year’s edition is tough news for the Spaniard who could only gain points with an appearance at the All England Club this year, the removal of everyone else’s 2021 points will put him back on an even keel with his fellow top 10 rivals after he was unable to compete and earn points 11 months ago.

Medvedev has already had a taste of the world No 1 ranking, albeit for just two weeks, when he ended the Big Four’s 18-year stronghold on the top spot on February 28. And he looks set to regain the top ranking when the Serb loses his 2,000 points from the 2021 tournament, with just 180 of the 26-year-old’s 7,980 ranking points coming from his round-of-16 appearance last year, proving that the points decision isn’t all bad news with the US Open champion almost being gifted a return to the world No 1 spot.

Another man who reached the round-of-16 last year and will almost certainly overtake Djokovic in the rankings when the 2021 points are removed is Zverev. As things stand, when the German loses 180 of his 7,075 points from last year’s edition of The Championships, he will reach a long-awaited career-high of world No 2, overtaking Djokovic for the first time.

These estimations have been made based on the removal of 2021 or 2019 ‘best of’ Wimbledon ranking points from each player’s current points tally. The players will continue to lose or gain points at the tournaments before Wimbledon begins, meaning some could exceed or underperform against their estimated rankings and points tallies.