The 19-year-old Spaniard – who beat Lleyton Hewitt’s record as the youngest player to hold the top ranking – revealed on Saturday his injury setback, which he sustained from a “chance, unnatural movement” in a pre-season training session.

Alcaraz planned to start his Australian summer at next week’s Kooyong Classic after sitting out the ATP Finals and Davis Cup at the end of last year to recover from an abdominal injury he suffered at the Paris Masters. 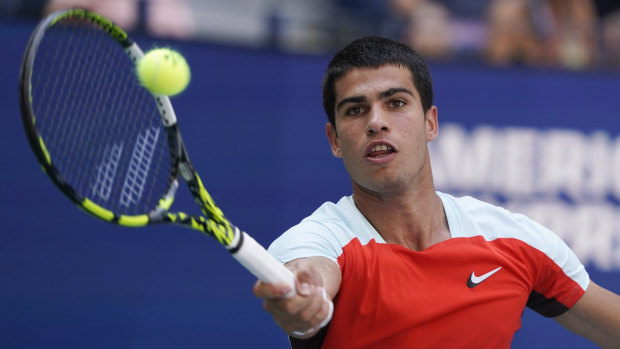 Spainish world No.1 Carlos Alcaraz is out of the Australian Open.Credit:AP

“When I was at my best in pre-season, I picked up an injury through a chance, unnatural movement in training. This time it’s the semimembranosus muscle in my right leg,” he wrote on Twitter.

“I’d worked so hard to get to my best level for Australia, but, unfortunately, I won’t be able to play the Care A2+ Kooyong or the Australian Open.

The teenage sensation is part of a youthful uprising on the men’s tour, joining fellow young guns Felix Auger-Aliassime, Holger Rune and Jannik Sinner in being ranked inside the world’s best 15 players.

Djokovic will return to Melbourne Park this month after a series of dramatic events related to his unvaccinated status led to him being deported last year.

The Serbian was also unable to contest the US Open, and earned no ranking points for his Wimbledon triumph after the ATP and WTA penalised the event for banning Russian and Belarusian players in response to their countries’ invasion of Ukraine.

Djokovic still enjoyed his usual outstanding results when he did compete, but slid to an unfamiliar No.5 in the rankings, which could have led to him playing defending champion Nadal in the Australian Open quarter-finals.

But Alcaraz’s absence means the 35-year-old climbs into the fourth seeding, so the way the draw works will instead see him not meet his great rival until at least the semi-finals – if they land on the same side.

The other big winner from Alcaraz’s withdrawal is Taylor Fritz, who becomes the No.8 seed and avoids a higher-ranked opponent until the last eight, while Adelaide semi-finalists Seb Korda and Yoshihito Nishioka are set to be seeded.

Korda beat Nishioka to reach the final and move into seeding territory, while the latter is poised to benefit from Alcaraz’s withdrawal to be the No.32 seed.

“You don’t have to face a top seed in potentially the first round. It’s really big,” Korda said.

“I’ve been seeded only once before, and actually played Alcaraz in the third round [at last year’s French Open].

“It’s pretty cool to come back to my second Aussie Open and be seeded. [There are] a lot of positives this week –I’m excited.”

Alcaraz, Reilly Opelka, Gael Monfils and Kamil Majchrzak are the missing men from this year’s Australian Open, with Venus Williams, Sara Sorribes Tormo and Qiang Wang out on the women’s side.

Djokovic is looking to extend his record number of Melbourne Park titles to 10 and equal Nadal’s overall grand slam tally of 22.