Belarusian tennis star Aryna Sabalenka has effectively labelled Wimbledon’s controversial ban on Russian and Belarusian players as pointless as the war in Ukraine rages on.

They will be able to compete at the Australian Open but only under a neutral flag, something Sabalenka told The Age made her feel like she was “from nowhere”.

Great Britain’s governing body for the sport, the Lawn Tennis Association, is yet to announce whether it will double down on the decision at the 2023 tournament, but international reports suggest there won’t be a repeat. 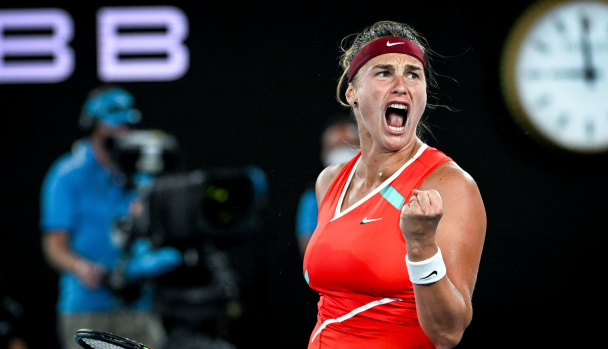 Aryna Sabalenka is trying to win her first grand slam title at the 2023 Australian Open.Credit:Eddie Jim

The ATP slapped the LTA with a $1 million fine in early December and threatened the organisation with expulsion from the tour if they ban players again, after already stripping Wimbledon’s ability to offer ranking points.

That followed the WTA issuing hefty fines to both the LTA and All England Club, which are both being appealed through the court system.

Australians Nick Kyrgios, Ajla Tomljanovic, Alex de Minaur and Jason Kubler missed out on significant ranking points after reaching the fourth round or better at Wimbledon in July.

“This is really terrible because no one supports war – no one,” the world No.5 said.

“The problem is that we have to speak loud about that … but why should we scream about that in every corner? It’s not going to help at all. We have zero control under this situation. 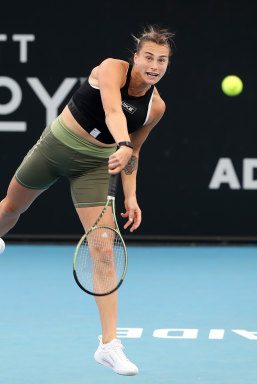 Aryna Sabalenka hopes to be able to compete at Wimbledon in 2023.Credit:Getty

“I’m just really disappointed sport is somehow in politics. We’re just athletes playing their sport. That’s it. We’re not about politics. If all of us could do something, we would do it, but we have zero control.

“They banned us from Wimbledon, and what did it change? Nothing – they’re still doing this, and this is the sad [part] of this situation.”

Sabalenka completed a pre-season-of-sorts in Miami instead during the British grasscourt swing and chose not to watch Wimbledon as she came to terms with not being there.

“It was a tough time. I was super disappointed with their decision,” she said. “I had a great time in Miami, but I really missed the people because the atmosphere at Wimbledon is super amazing. You can feel these people really love tennis there, and I really miss them.

“I really hope that I’ll play there [in 2023], just because of the people, to feel this atmosphere. But if they’re going to ban us again; I don’t care about Wimbledon’s decision. The only thing I’ll miss is the people.”

Sabalenka is starting her Australian Open preparation in Adelaide, where she is the No.2 seed and has a first-up bye, as she chases an elusive grand slam title.

She made her third grand slam semi-final at the US Open in September, revealing during that run that her Wimbledon ban served as extra motivation.

Sabalenka won’t have to get through Australia’s retired defending champion Ash Barty this time and is thankful to be rid of the extreme serving yips that plagued her last summer and beyond.

“It started as the worst season and finished as the best season because I learned a lot. That Australian Open, even without the serve, I still made it to the fourth round,” she said.

“This gave me a lot more confidence in my game. I knew that I just had to fix my serve, and at the end of the season, I finally found it.

“Oh my God, it was the worst feeling and I hope that nobody will ever face this challenge.”

Watch all the action from the summer of tennis, including the United Cup, live on Channel Nine, 9Gem and 9NOW.