Experienced Australian tennis player John Millman, a member of the ATP Player Council, believes unvaccinated tennis stars who complete 14 days of hard quarantine should have the chance to play the Australian Open.

Amid a stoush between the federal government and state authorities over entry requirements into Australia – with Victorian Premier Daniel Andrews refusing to seek an exemption for the unvaccinated – Millman has also explained why vaccination rates on the men’s tour have been sluggish and remain at about 70 per cent. 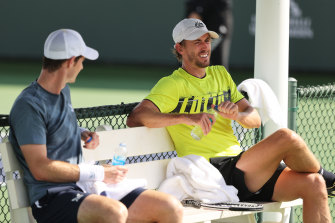 John Millman has backed unvaccinated players at the Australian Open if they complete a hard 14-day quarantine.Credit:Getty Images

Prime Minister Scott Morrison and other federal ministers have backed giving all players the chance to compete in Melbourne – providing unvaccinated players complete quarantine – arguing that granting exemptions to them was akin to allowing other workers with specialist skills into the country during the COVID-19 pandemic.

Victoria, however, has mandated two jabs for authorised workers in Victoria – affecting staff and officials who’ll work at Melbourne Park in January. Premier Andrews unequivocally said the state would not seek an exemption for tennis players, describing the situation as “basically resolved”. Tennis Australia, which has been resisting mandatory vaccination for players, is caught in the middle.

Millman, currently in Russia but who has been playing tennis across the globe since January, told 3AW that unvaccinated players deserved the chance to compete in one of the sport’s four majors.

“I’m pro vaccination. I’m all for getting the jab. I’ve had it over here and I’m feeling good,” Millman said.

“But I do want to see an opportunity for all the players to be able to play tennis, whether that be unvaccinated people having to go in and do the 14 days hard quarantine, like we’ve seen throughout the year – people returning back home who’ve been unvaccinated do. I’d like to see them at least have that opportunity.

“It is encouraging that those who are vaccinated can come in and play the Australian Open, definitely.”

Millman confirmed that the ATP has been actively encouraging the player cohort to be vaccinated.

“The ATP’s stance is they haven’t made it compulsory for players to get the vaccination, but they’re not going to stand in the way of [the rules set by] governments and local jurisdictions,” he said.

“I’m pro vaccination. I’m all for getting the jab … but I do want to see an opportunity for all the players to be able to play tennis, whether that be unvaccinated people having to go in and do the 14 days hard quarantine.”

“The men’s tour’s now up around 70 per cent [double dosed] and that number’s going up each day in terms of the guys in the top 100.”

The Age has previously revealed that Australian tennis chiefs spent months raising concerns about a vaccine mandate because of its potential to turn away leading players who are vaccine hesitant. World No.1 and nine-time Australian Open champion Novak Djokovic, for example, has refused to disclose his vaccination status and said he could skip the trip to Australia.

Millman said he expected leading tennis players would still come to Australia, even with faced with a two-week stint of hard quarantine – something that dozens of players did before last February’s Australian Open when vaccines weren’t yet available.

“Look I think so, I think that they will still come,” Millman said.

“I can’t speak for them, but I do believe that the majority of players, even if they are unvaccinated, would still come, even if it meant doing the 14 days.

“It’s not ideal. I’ve done that [hard quarantine] before. It is extremely hard to ‘find’ the tennis ball when you come out of it.

“The Australian Open at the end of the day – it is one of the four biggest events that we have. It’s a great opportunity. You don’t get to play grand slams day in, day out. [But with] both the accolades of playing a grand slam and doing well in a grand slam, along with the prizemoney that’s on offer, I think is a nice caveat.”

The 32-year-old backed the school of thought that the jam-packed tennis calendar wasn’t conducive for players seeking the right “window” for vaccination, helping explain the slow uptake among players.

“We’re in a different country every week,” said Millman.

“If you are like myself, for example, it’s very hard to come across the vaccine, especially early on [when they became available this year].

“With all the travel that we do … not all the countries are handing out vaccinations left, right and centre.

“You have to be a citizen of the country. There is a queue like in every other country. Like back home in Australia, there is a queue to register to get the vaccination. They’re not just giving them out willy-nilly to non-citizens.

“I think players are looking for a slight break in the schedule.

“There’s tournaments for just about 46, 47 weeks of the year.

“The next day [after a vaccination], a lot of people you do feel a bit crook. You have the dead arm for three days. There’s that timing factor of marrying that vaccination up with a small break in the schedule.”