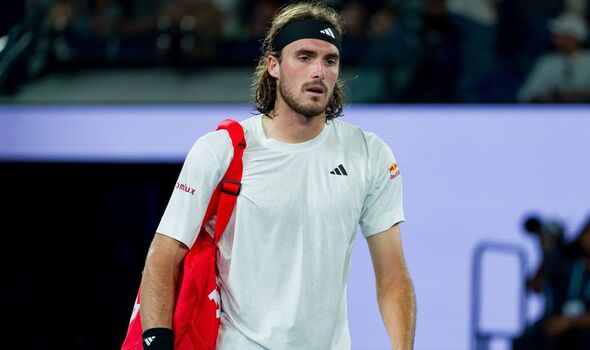 Stefanos Tsitsipas has explained why he won’t make friends on the tennis tour despite wanting to have better relationships with his rivals. It comes after Nick Kyrgios claimed that no one in the locker room “liked” the world No 4 following their fiery Wimbledon third-round clash that saw the Aussie upset the 24-year-old in four sets.

Tsitsipas has long been tipped as one of the next big names in tennis and has already proven his ability by winning the ATP Finals and reaching the 2021 French Open final. While the Greek star has now spent a few years on the tour and established himself, he was profiled by GQ as one of tennis’ rising stars and made a surprising revelation about friendships in the tennis world.

The nine-time title winner is known for keeping to himself compared to the likes of some of his rivals, and has now admitted that he doesn’t feel like he can connect with them. “I would love to have friends on tour,” he said.

“I just don’t feel like I relate to a lot of them, in terms of how I approach life.” Tsitsipas’ comments come a few months after Kyrgios claimed other players in the locker room didn’t “like” the Greek player in response to learning that Tsitsipas branded him a bully.

Kyrgios defeated Tsitsipas 6-7(2) 6-4 6-3 7-6(7) in a dramatic third-round meeting at Wimbledon last summer that saw both men receive hefty fines for their outbursts as the world No 4 smashed a ball into the stands in frustration, prompting the Aussie to demand Tsitsipas be defaulted.

“It’s constant bullying, that’s what he does. He bullies the opponents. He was probably a bully at school himself. I don’t like bullies,” the world No 4 said of Kyrgios after the match – comments which were put to the Aussie himself.

“I just think he’s making that match about me, like he’s got some serious issues, like serious,” the eventual-finalist started afterwards. And the 27-year-old brought up off-court friendships as he revealed that he had plenty of companions on the tour compared to his opponent.

“I’m good in the locker room. I’ve got many friends, just to let you know. I’m actually one of the most liked. I’m set. He’s not liked. Let’s just put that there,” he added.