You always got the feeling that the toughest opponent for Nick Kyrgios to ever overcome on a tennis court was himself. It’s often those who tell the world they don’t care what people think about them who have the most complexities of all.

A straight-sets win to reach his first grand slam semi-final doesn’t quite tell the story of how the Australian, loved and loathed in equal measure, found himself in unchartered territory. 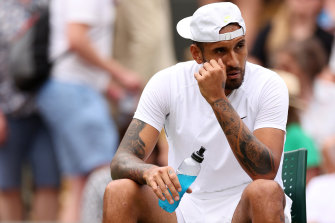 Australia has not had a man in a grand slam final since 2005, and Nick Kyrgios says he is ready to dream of lifting the trophy.Credit:Getty

But it became clear, despite the one-way scoreline, that the world number 40 was wrestling hard with two opponents on Wimbledon’s court one on Thursday morning: Chilean Cristian Garin and Nick Kyrgios.

On several occasions, the 27-year-old stood on the baseline and exploded at himself.

He was agitated and distracted, ranting at the sometimes boisterous crowd – who shooshed him back – as he yelled “don’t say that” in the direction of his support team.

These are the moments where over nearly 10 years of grand slams Kyrgios has mentally disintegrated and thrown away golden opportunities. It was part of the full Kyrgios experience. You couldn’t have the good without the bad, nor the highs without the lows. 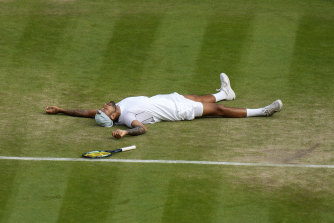 Warmly received by the crowd, he lost the first nine points of the match before finding his rhythm. He performed when it mattered most, saving eight of the nine break points he faced, hitting 17 aces and winning 73 per cent of points on his first serve.

He was so focused, so disciplined; we didn’t even see an underarm serve. One wag, presumably frustrated that his afternoon was lacking the explosive nature of a typical Kyrgios encounter, shouted “do the serve!". He never gave into temptation.

On match point, Kyrgios’s approach was called out. The umpire overruled it. 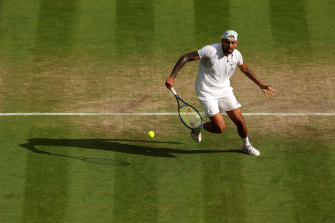 Nick Kyrgios plays a backhand against Cristian Garin of Chile.Credit:Getty

“What the hell are you doing?” Kyrgios shouted, threatening again to blow his stack.

It did not matter. Moments later, Kyrgios fell to his back, arms spread out, as a missed shot from Garin confirmed his place in the last four. He is the first Australian man to make it this far at the All England Club since Lleyton Hewitt in 2005.

The self-styled bad boy of tennis might just be about to come good.

He says it’s all down to a new-found maturity, as simple as “getting some rest”.

“Like, Nick, stay in the house,” he said after the match. “That’s not always been the easiest thing for me over my career.”

“I didn’t go about things great early in my career and I thought my ship had sailed. I’m really proud of how went about things out here.”

Kyrgios is the lowest-ranked men’s semi-finalist at SW19 since 2008, when 75th-ranked Marat Safin and 94th-ranked Rainer Schuettler advanced.

His remarkable run to the semi-finals, where he will meet Rafael Nadal on centre court for the third time in his career, has captured the imagination of sporting fans but has been at times marred by run-ins with opponents, umpires, line judges, journalists, the crowd and even fashion police.

But hanging over his head on the biggest day of his career was the fact he has been summoned to appear in an Australian court to answer allegations that he assaulted an ex-girlfriend.

It cast a long shadow over this match, and it will over the next. The gravity of that situation makes his misdemeanours on the court this fortnight seem rather trivial.

Nobody knows the truth of the allegations and they will be explored in the fullness of time. He is until then entitled to the presumption of innocence. But it has made for a remarkable and uncomfortable backdrop to the remainder of this tournament.

“Obviously I have a lot of thoughts, a lot of things I want to say, kind of my side about it. Obviously, I’ve been advised by my lawyers that I’m unable to say anything at this time,” Kyrgios said after the match.

No amount of follow-up questions could extract any more answers.

He was reserved, relatively humble and incredibly focused. He suggested the attention surrounding the allegations hadn’t affected his preparation.

But how could it not have?

“I’m only human,” he said. “Obviously I read about it and obviously everyone else was asking questions.

“[But] it was quarterfinals of Wimbledon today. I know deep down that’s what I was prepared for.”

Australia has not had a man in a grand slam final since 2005, and Kyrgios says he is ready to dream of lifting the trophy.

To do that he must not only overcome Nadal, the most successful player of all-time, but most probably Novak Djokovic.

But importantly first, it seems, as if he has finally conquered himself.

The Morning Edition newsletter is our guide to the day’s most important and interesting stories, analysis and insights. Sign up here.