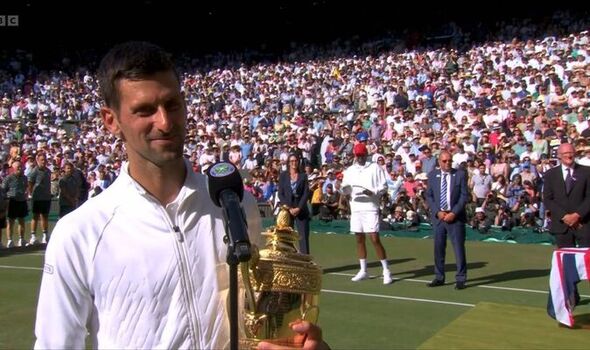 Novak Djokovic has joked that the reason Nick Kyrgios lost to him in the Wimbledon final was because the Australian did not want to follow through on their promise for the champion to pay for dinner. Just last year, Djokovic and Kyrgios’ relationship off the court was strained and the polar opposites never looked likely to become friends.

Everything changed during the Australian Open visa fiasco for Djokovic earlier this year when Kyrgios was one of just a few people to show support for the Serbian. Since then, it seems as though the pair have struck up an odd ‘bromance’, according to Kyrgios.

The pair have regularly messaged on social media and even spoke ahead of Sunday’s final. Fireworks were still expected on the court and Kyrgios took the opening set with a potential upset on the cards.

But Djokovic rallied to take the following three sets and win his fourth consecutive Wimbledon title. Kyrgios was competing in his first ever Grand Slam final and the Aussie star joked afterwards that he didn’t know whether he’d be able to repeat that feat.

But Djokovic is convinced the 27-year-old will be competing for major titles in the future.

“Nick, you’ll be back,” Djokovic said. “I never thought I’d say so many nice things about you considering the relationship. Okay it’s officially a bromance.

Sue Barker then pointed out how their friendship took another level this week when the pair exchanged words about the winner buying each other dinner. Djokovic was about to respond before hearing Kyrgios chime in quickly and the Serbian jokingly quoted his rival, saying: “That’s why he lost. 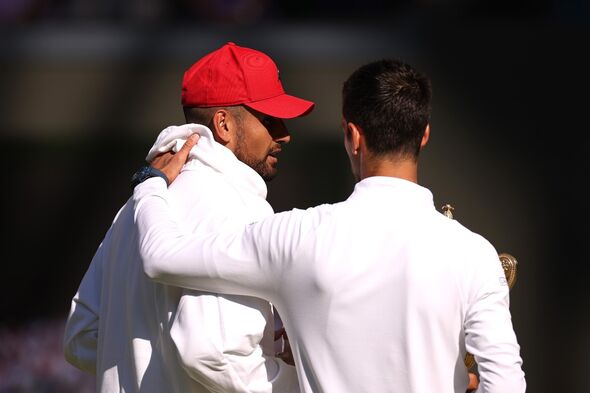 “I don’t know if we’re going to make it happen tonight or some other night. Hopefully this is the start of a wonderful relationship between the two of us off the court as well.”

The BBC presenter continued to ask about the Instagram exchange, with Kyrgios’ last message being a request for the pair to go to a nightclub.

Djokovic then said: “I didn’t reply to that because my wife was next to me. Lets start with dinner and drinks and we’ll see.”