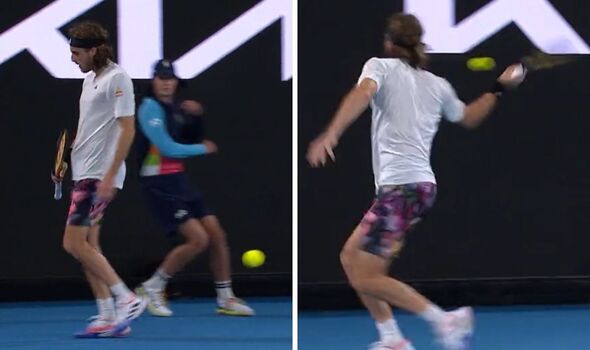 Stefanos Tsitsipas has insisted that he was “not aiming to the ball kid” towards the end of the third set against Jiri Lehecka when he smacked a ball against the wall in frustration. Tsitsipas has been on a roll at the Australian Open and is being tipped as Novak Djokovic’s biggest challenger to winning his 10th title Down Under.

The Greek star continued his good run of form with a straight-sets win over Lehecka to progress to the semi-final. But there was a hairy moment for the No 3 seed towards the end of the third set when he let his emotions get the better of him.

After failing to return a smashed forward from his opponent, Tsitsipas reacted furiously by smacking the ball back at the wall behind him. He seemed unaware that the ball kid had started to run towards Tsitsipas’ direction before his moment of frustration.

Jim Courier said on commentary that the 24-year-old was lucky not to be defaulted, much like Novak Djokovic was when he hit a lineswoman at the 2020 US Open. But Tsitsipas has played down his on-court incident, stating he felt he was nowhere near hitting the ball kid.

“I saw the ball kid when the ball came back,” he said. “I’m a professional tennis player. I was not aiming for the ball kid obviously.

“I saw the wall, just went back towards the wall. The ball kid, in my eyes, was pretty far away from me. Would have really had to miss to hit that ball kid.

“Of course, it’s not nice even to hit it back towards the wall. I personally don’t think I hit it too hard. But doesn’t matter. Doesn’t matter.

“What I did, definitely I’m not happy about that. I shouldn’t have done it. But it was part of the moment. My ball fell short. There was a little bit of frustration there, but things happen.

“I just continued and continued playing from that point onwards. I didn’t let that affect me because the distance was pretty big and the margin, yeah, really had to do something different there.”