Bernard Tomic has poured petrol on his heated feud with Nick Kyrgios by labelling his former teammate “delusional” and challenging him to either a million-dollar winner-takes-all tennis match or a boxing fight.

The relationship of two of Australia’s highest profile tennis stars has soured following a flurry of verbal barbs on social media.

This week Kyrgios labelled Tomic Australia’s “most hated athlete” and scoffed at Tomic’s suggestions he would come off second-best on the court.

Tomic told the Herald on Friday he was willing to put $1 million on the line if Kyrgios had the courage to back up his claims of superiority.

“At the end of the day, talk is cheap,” Tomic said. “I’m ready to make it 2-0 whenever you want. Put your money where your mouth is.

“Let the public decide who is better. I’ll beat you anywhere, any place. If not, shut your mouth and go back to playing doubles.” 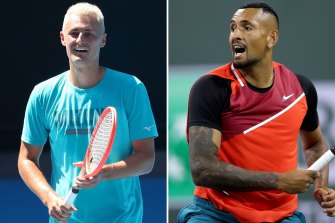 Tomic and Kyrgios have only played each other once before, in an Australian Open exhibition match at the Kooyong Classic in 2019.

Tomic aced Kyrgios on match point with an underarm serve between his legs.

Since then, Tomic has plummeted down the world rankings but has challenged Kyrgios to a battle across a number of different sports.

“I beat you once before, I’ll beat you again whenever you want,” Tomic said. “I dominate you every time we play, train, and we know that.

“You say you’re good at basketball, I’ll beat you at that too.

“Tennis? I’ll dominate you one-on-one. To not make excuses, I’ll even play you on grass, whenever you want.

“You know what? Let’s sort this out in the boxing ring. Put your gloves on, I’ll dominate you there also. Let’s see who’s better once and for all.”

Earlier this month, Kyrgios made the bold claim he was the world’s best grasscourt player ahead of Wimbledon next month.

“Honestly, you’re delusional,” Tomic said. “You’re dreaming. You have the No.1 mouth in the world for sure.”

A clash between two loudmouths of the sport would be a promoter’s dream, but Kyrgios doesn’t appear too keen on the idea judging by his latest Instagram video, filmed inside his green Tesla on Friday morning.

“I’m still playing on the tour, my brother. I’ve got bigger fish to fry,” Kyrgios said. “I’m actually in a grasscourt training block right now preparing for tournaments. Wimbledon and then US Open.

“I understand you’re at that future and Challenger level right now but if you want to play me and you want to set this straight, just get back to the top of the sport. I’m right here, I’m not going anywhere.

“I still feel that I’m elite. I’m still beating some of the best in the world quite easily.

“I’ll be waiting for you and if you’re capable of playing a decent level of tennis, you’ll show that. There’s no need to go through the media [and] use my name to get relevant again. Let’s just see your results, stop living in the past and let’s play each other on the main tour.”

As for getting the gloves on in the ring? Don’t rule it out.

“Maybe one day my brother we can later on when my career winds down,” Kyrgios said.

“As for now, I think you’ve got some bigger life challenges ahead brother, so best of luck.”

Watch every match from Roland Garros ad-free, live & on demand on Stan Sport, with courts streaming in 4K UHD.

Coverage of select matches commences on 9GEM from 6.30pm AEST each night.