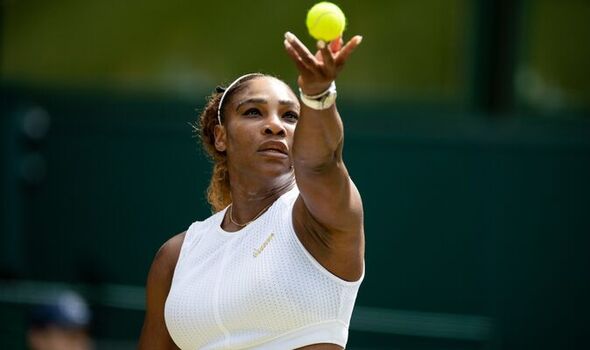 Serena Williams will leave her WTA colleagues “scared” to face her at Wimbledon according to Barbara Schett, as the American gears up for her return to the tennis tour. The 23-time Major champion will be playing doubles at Eastbourne before returning to Wimbledon a year after retiring injured on Centre Court, and Barbara Schett has explained how the rest of the players will feel about her comeback.

Williams announced on Tuesday that she would be returning to Wimbledon a year after retiring injured just six games into the tournament – her last appearance on a tennis court. She will partner Ons Jabeur in the doubles at Eastbourne before returning to SW19, with the chance to also play singles at the Rothesay International.

Ahead of her impending comeback, former pro Schett has lifted the lid on what other players on the WTA Tour will think of Williams’ return and admitted that no one will want to face her at Wimbledon, where she will be unseeded with her ranking dropping to No 1208 in the world following her year out of competition.

“I couldn’t believe it. I was going through my Instagram account, and then suddenly I see the post from Serena Williams. I was like, ‘wow, Serena Williams is coming back. She’s playing Wimbledon’,” the former world No 7 told Eurosport. “Nobody thought that she was going to play there because we had a close look at the entry list. She wasn’t entered.”

JUST IN: Medvedev reacts to news he can defend US Open as Russia ban ruled out

The Austrian star thought that the younger Williams’ sister’s return was “exciting” for women’s tennis though didn’t know if the players on tour would agree. She continued: “She hasn’t played for one year, and now she’s decided to take that wild card. It’s very exciting, I think for women’s tennis, it’s very exciting for all of us to be able to watch her. And I think it’s exciting times for her. The question is, just how much has she practised?

“I think if you’re out for a whole year, it’s very difficult because you’re not playing any matches. Even if you only practise a lot. It’s not the same.” Despite a year out of the game, Schett thought the seven-time Wimbledon champion would still be feared by her colleagues in the draw at the All England Club.

“But one thing is for sure,” she added. “Nobody wants to play against Serena Williams. So the other 127 players are going to be scared to draw Serena Williams.” Despite claiming other players on the WTA Tour would be “scared” of the 40-year-old, Schett also cast some doubt over Williams’ ability with question marks surrounding her current level.

“I think with her game style, she has a big serve. If she has been practising, that will help her a lot. But the matter is, how is her movement going to be on the grass court?” she questioned.

“But we all know that’s the hardest area, the hardest surface to actually move [on]. And I think we [will] get a better idea when she plays that first match. But I’m sure she’s going to be very rusty. Plus, she’s 40 years old, which for a tennis player is quite old, unfortunately.”