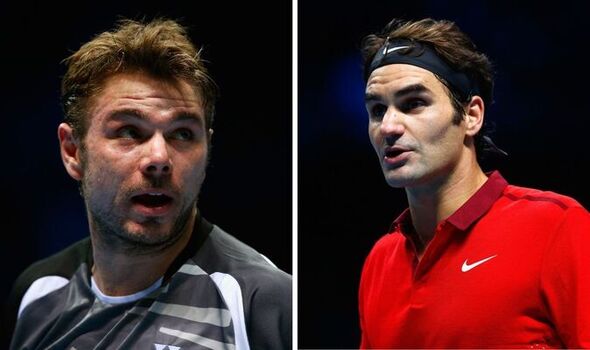 Stan Wawrinka has recalled a “very tense and complicated” argument he had with compatriot Roger Federer days before the pair joined forces to win the Davis Cup in 2014. The pair have long enjoyed a close relationship but it was threatened following their semi-final match at the ATP Finals, when the three-time Major champion accused Federer’s wife of calling him a “crybaby”.

Federer’s 24-year career finally drew to a close this year as the 41-year-old returned from 14 months on the sidelines for one last dance at the Laver Cup, playing a doubles match alongside long-time rival Rafael Nadal before waving goodbye in front of a packed O2 Arena. Part of the former world No 1’s legacy will be his classy and elegant reputation, but Wawrinka has now recalled a feud the pair had at the same venue just eight years earlier.

The two Swiss players have been “real friends” for years, enjoying a close relationship away from the court while contesting their first match against one another in 2005. But their friendship came to blows during the 2014 ATP Finals when Wawrinka accused Federer’s wife of shouting at him while holding match points during their semi-final clash, which the 20-time Grand Slam champion went on to win 4-6 7-5 7-6(6).

“Did you hear what she just said?” the former world No 3 asked umpire Cedric Mourier after Mirka was said to have called him a “crybaby”, while the chair official said had “not heard anything”. But Wawrinka continued to vent his frustration towards Federer’s wife as he accused her of regularly putting off opponents.

JUST IN: Stefanos Tsitsipas bidding to upset Nadal in No 1 race to make history

“She did the same thing at Wimbledon. Every time I am on her side she yells before I serve. It’s unbearable,” he claimed. The 37-year-old also turned to address Federer about his wife’s behaviour directly, shouting across the net and asking: “What did she say?”

It prompted reports of a locker-room row between the two after the match, and Wawrinka has now confirmed everyone’s suspicions eight years later as he looked back on the incident. “We could have made some movies together,” he laughed, speaking to the RMC podcast.

“For sure, it was very, very tense right after the semi-final. Very, very hot. Very, very complicated, on both sides. It’s a good thing there were no cameras in the hallways and locker rooms back then.” Wawrinka admitted that heightened emotions would have contributed to their feud, as he admitted it blew out into a “big argument” before the pair patched things up in time to represent Switzerland in the Davis Cup final.

“But once again, at some point, when you get caught up in the emotion, for things that don’t necessarily happen because of your fault, you have to know how to take some distance,” he explained. “Don’t forget everything we’ve been through together, let the night and the next day pass, don’t see each other and then simply discuss it.

“We had to remember that we had a Davis Cup to win. I wasn’t going to let a little argument, which became a big one because of the emotions, disrupt this victory.” But the pair made up on the train to Lille for the Davis Cup and managed to win their maiden title at the men’s World Cup of tennis together.

The pair have remained like “brothers” ever since and Wawrinka admitted he shed a tear when Federer’s career came to an end at the Laver Cup, despite not being there with fellow rivals Rafael Nadal, Novak Djokovic and Andy Murray for the emotional moment. The current world No 150 said: “I cried for Roger. It was hard, a strong feeling. Even talking about it is difficult. When I got on the tour, he was already there. He was like a big brother to me, a friend.”