The moment, when it came, was exquisitely framed. With an impossibly expensive watch on his left wrist, sheets of monogrammed “RF” letter paper on his desk, and eight golden replicas of Wimbledon’s Challenge Cup glinting in the cabinet behind him, Roger Federer looked every inch the emblem of casual Swiss luxury as he delivered the announcement that his sport, indeed all sport, had dreaded.

He is, as befitting somebody globally exalted for nearly 20 years, mindful of his own magnificence. As such, he made sure that his final valediction had both the tone and the staging of a state address. Fittingly, he saved the line heaviest with pathos until the end. “To the game of tennis,” he declared, “I love you and I will never leave you.”

It is a wonder that he recorded those words without his voice quavering. Federer, for all his imperturbable mid-match poise, is a sensitive soul. He has cried in interviews, even on court in both victory and defeat. For him, and for his countless disciples, leaving the grandest stage for good is a loss almost too grievous to bear.

To watch Federer in the flesh was to savour a particular aesthetic, a glimpse of sport at its most idealised, in which a technically fiendish game became a spectacle of the purest artistry. Sometimes, parallels were drawn between Federer on Centre Court to Nureyev at the Bolshoi. Typically, comparing a tennis player to a ballet master would be an outrageous overreach. Not with Federer.

The more you studied him, the more you noticed how not a single element of his performance was rushed or forced. There was never a split-step out of place, never a piece of footwork that did not look liquidly rhythmic. There was rarely – save for one New York night where they left the roof on Arthur Ashe Stadium – even a bead of sweat on his brow.

Federer is the reason why high-rollers in the city would spend half their annual bonuses on Wimbledon finals that involved him. He is the reason why his hordes of adoring fans from the Far East would camp out along Church Road overnight, bedecked in the red-and-white of the Swiss flag.

Federer was, in so many ways, an art installation in human form. While he could sometimes be outmuscled by Rafael Nadal or outsmarted by Novak Djokovic, he could never be eclipsed as the template for how tennis was supposed to be played. It was not a coincidence that Anna Wintour, editor of Vogue, would often be spotted in his corner. She was drawn to him not just because he cut a dash in a Versace suit, but because he conveyed a look of supreme elegance.

Where Djokovic would contort himself into ungainly shapes, Federer made the racquet appear a natural extension of his body.

Many greats never truly grasp the scale of their gifts. But Federer, you sensed, revelled in his astounding virtuosity. On several occasions, he made remarks that would have seemed unforgivably grand if uttered by anyone else. In Melbourne in 2010, he expressed the difficulty for Andy Murray thus: “I know he’d like to win his first slam. But he’s in his second final now. Plus, he’s playing me.” 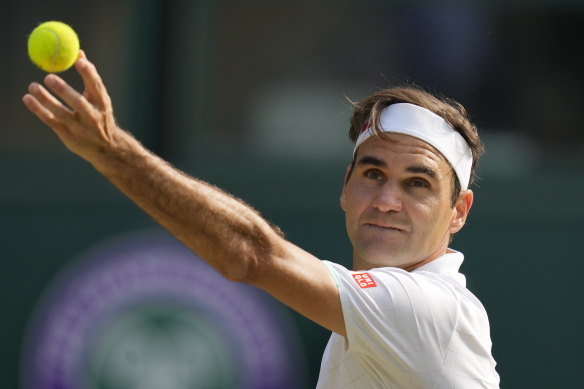 In Halle, the German grasscourt event he won so many times that he had a local street named after him, he took to training in a T-shirt emblazoned with his own face. And at Wimbledon, his cherished fiefdom, Nike dressed him for the walk-ons in 2009 in a diamond-white military jacket, coupled with a gaudy, golden shoulder bag. There is not another sportsman alive who could have carried off such ostentation without a locker-room uprising. And yet, Federer not only backed it up with his ability, he did so without his rivals having a bad word to say about him.

Take Andy Roddick: having lost his third Wimbledon final to Federer, 16-14 in a fifth set, he watched him change into a top decorated with the number “15”, signifying a then record haul of major men’s singles titles. But far from railing at any perceived conceit, Roddick became one of Federer’s closest allies.

It was Roddick’s misfortune, at least for his career statistics, to compete in the shadow of the greatest sorcerer tennis has known. The American, like so many who followed, looked broken and bewildered by the magic unleashed from the other side of the net. In one famous match in Basel, Federer’s hometown, he imagined he had sealed a point with a smash, only for the Swiss, skipping into the farthest corner of the court, to concoct a staggering overhead with so much side spin that the ball swerved back inside the line for a winner. Roddick, fittingly, threw his racquet at Federer in despair.

Federer was the most potent antidote to cynicism in sport. Just when you thought you knew every flourish in his repertoire, he would fashion another to defy all kinetic conventions. There was no starker illustration than during a US Open semi-final against Djokovic, where, after one delicate exchange at the net, he scampered back to the baseline to fire a “tweener” straight past the befuddled Serb. Even father Robert was out of his seat in wonder, struggling to compute what he had just witnessed. 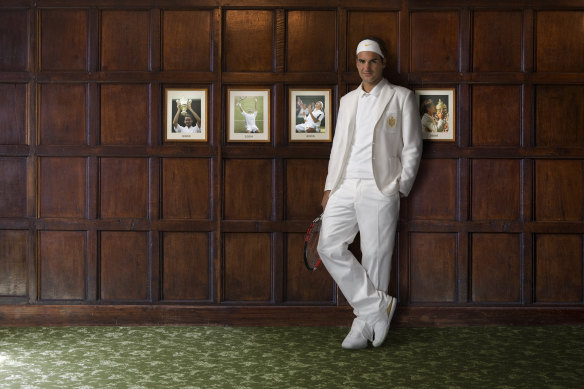 Federer at Wimbledon in 2007.Credit:Getty Images

Once, Federer was just another ambitious teenager with a ponytail and a volcanic temper. One of his former coaches reflected: “When he was 14, you had to run away, because he was throwing racquets around.”

It was among his finest achievements that, somehow, he learnt to translate this raw belligerence into his shot-making rather than his body language, seldom betraying a trace of irritation as he filleted his adversaries for fun.

Very few, whether in tennis or elsewhere, are acclaimed both as icons of their craft and of sportsmanship. Even fewer succeed in negotiating their professional lives without so much as a flicker of scandal.

Tiger Woods, with whose dominance his own pomp overlapped in the mid-2000s, was later exposed as a serial adulterer, so lost in life that he was arrested on a Florida road in the dead of night while under the influence of prescription drugs. Federer stands in gleaming contrast to such chaos. Whether through his marriage to childhood sweetheart Mirka, or through his two sets of twins – two girls and two boys, all dressed in matching outfits to watch his last Wimbledon final in 2019 – his personal hinterland is a place of the neatest symmetry.

The poetry of his parting is not quite as Federer would have scripted it.

He did not go through three surgeries to broadcast his retirement on Instagram, without the Wimbledon curtain-call he craved. While Pete Sampras, the man he usurped, had the satisfaction of bowing out with a 14th major in New York, Federer cannot change the fact that his final act at the All England Club was to lose a set 6-0 to Hubert Hurkacz. This, though, will be a forgotten postscript. After all, he has bequeathed a museum’s worth of masterpieces.

It is difficult to imagine that any champion will command such intense collective adoration again. All the living legends of Wimbledon were present for this summer’s Centre Court centenary celebration, from Rod Laver to Bjorn Borg, Chris Evert to Billie Jean King. But it was the introduction of Federer that sent the crowd into the wildest raptures. “I miss being here,” he said. “I hope I can come back one more time.”

How painful that it shall not now come to pass. Federer assumed such stature at Wimbledon that he became the thread that held the whole tapestry together. It turns out that the player who romanticised tennis for millions does not have the privilege of bowing out entirely on his own terms. Within just a couple of hours of his statement, you saw how acutely he will be missed. 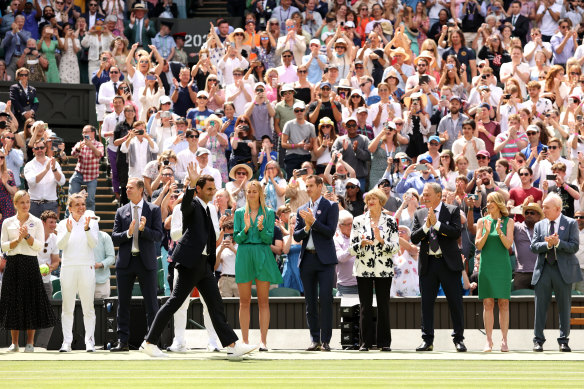 “I wish this day would never have come,” Nadal said. “It’s a sad day for me personally, and for sports around the world.”

They will be poignantly reunited at next week’s Laver Cup, the competition that Federer helped create in his idol’s honour.

But this is one occasion that will, quite rightly, be redrawn as a Federer tribute show. He might take his leave behind Nadal and Djokovic in the slam stakes, but nobody has implanted themselves more indelibly in the public consciousness.

In less-cultivated hands, tennis can be a game of attrition. Federer made it one of wonder. His is a contribution that extends far outside the tramlines of the courts he graced. For he was, quite simply, sport’s ultimate sophisticate.