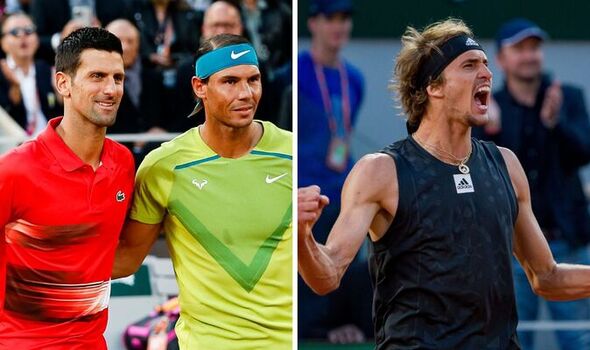 Rafael Nadal’s French Open quarter-final victory over Novak Djokovic means the Serb will lose his world No 1 ranking later this month, with the 13-time champion’s next opponent Alexander Zverev landing a huge advantage for Wimbledon. Djokovic was the defending champion in Paris but Nadal got revenge over the top seed for beating him in last year’s semi-final.

Nadal and Djokovic renewed their rivalry for a 59th time on Tuesday night as they faced off in the French Open quarter-final, almost exactly a year after their last meeting in the semi-final stage in Paris. And this time it was the Spaniard who came through victorious with a 6-2 4-6 6-2 7-6(7) victory in four hours and 12 minutes.

It means the Serb will not be able to defend his title from last year and will lose 1640 ranking points as a result of crashing out in the quarters, signalling the end of his reign as the world No 1. With world No 2 Daniil Medvedev losing in the round-of-16, Djokovic could hold onto the top spot until June 13 before forfeiting it to Medvedev, while Zverev will break into the world’s top two for the first time.

But the German could also dethrone Djokovic as early as Monday and become the new world No 1 if he wins the French Open. Zverev faces Nadal in Friday’s semi-final, and even if the world No 3 fails to get past the ‘King of Clay’ he will reach a career high of No 2 on June 13, which will automatically make him the top seed at Wimbledon.

JUST IN: French Open to listen to Novak Djokovic and Rafael Nadal complaints

It also means the 25-year-old would avoid reigning Wimbledon champion Djokovic in his draw as they will be the top two seeds and appear in opposite halves, meaning they could only meet in the final.

But the 19-time title winner is well aware that he will have a tough task on his hands in attempting to reach the final before he can even think about lifting the title. Before Nadal and Djokovic’s clash on Tuesday, the third seed said: “Now I have the No 1 in the world or the 13-time winner here. Things don’t get easier.”