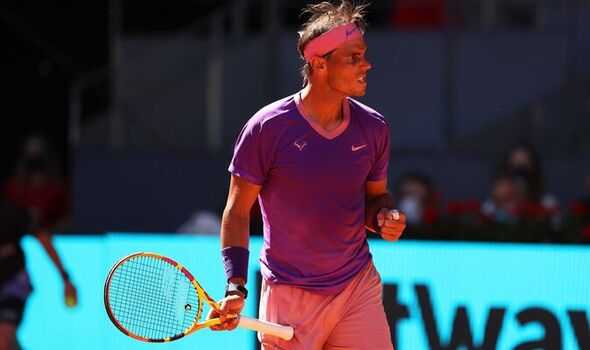 Rafael Nadal is on track to make his comeback from injury at the Madrid Open at the beginning of May. The world No 4 has been sidelined since Indian Wells after picking up a stress fracture in his rib but his former coach and uncle Toni Nadal has now shared a conversation between the two, confirming that the ‘King of Clay’ hopes to return at the tournament where he is a five-time champion.

Nadal started the season on a 20 match-winning streak, picking up titles in Melbourne, the Australian Open and Acapulco before he fractured his rib in the Indian Wells semi-final. He then lost the championship match to Taylor Fritz the following day and has been sidelined since. But the world No 4 is now set to make his return in less than two weeks after his uncle and former coach revealed his comeback plans.

The Spaniard missed last week’s Monte Carlo Masters and was then forced to withdraw from this week’s Barcelona Open, leaving the Madrid Masters as the next big clay event he could return at. And Toni Nadal has now confirmed that his nephew is set to travel to the tournament, which begins on May 2. “He told me yes, that he would arrive. Then, we’ll see,” the current coach of ATP No 9 Felix Auger-Aliassime told TVE.

The news comes after the 21-time Major champion finally returned to the practice court after four weeks on Monday, commemorating it with a social media post. His uncle Toni continued: “Yesterday he started training and he still has 15 days left to see how everything evolves. If he arrives in good condition, he will play.”

JUST IN: Tsitsipas explains goal to break up Djokovic and Nadal dominance

Days after Nadal’s team admitted they did not know when the Spaniard would be making his return from injury, he took to social media to announce that he was back on the court. “Today after 4 weeks without stepping on a tennis court, first soft training,” he wrote on Monday. “What an illusion to step on the clay again!”

“Rafa has just been withdrawn from the entry list in Barcelona. We don’t know yet when he will be at his first tournament on clay this year. Hopefully, soon,” his team said in a statement last Tuesday, confirming his withdrawal from the Barcelona Open. But it is now hoped that Nadal will follow his original injury timeframe of four to six weeks on the sidelines, returning for Madrid and the Rome Masters – which takes place a week later – before competing for a record 14th French Open title.

The 35-year-old started the season by winning a record 21st Grand Slam title at the Australian Open fresh off the back of a six-month injury layoff. Following his undefeated start to the season that ended in the Indian Wells final, he was the favourite to extend his lead to 22 Majors at the French Open, his most successful tournament.

If he can get some matches on the clay in Madrid and Rome ahead of the Parisian Grand Slam tournament, he will likely cement himself as the favourite once more after the rib injury put his chances in doubt.