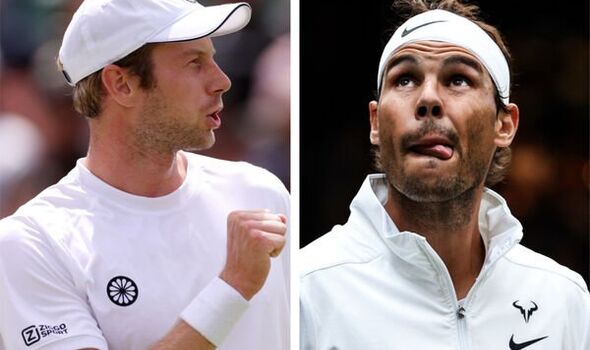 Rafael Nadal can keep his hopes of winning a Calendar Slam alive if he defeats Botic van de Zandschulp today. The Spaniard, who has already won the Australian Open and French Open this year, will move to within three games of a third Slam this year with a win over his Dutch opponent.

Nadal is, however, expecting anything but a walk in the park despite heading into the tie the hot favourite.

Speaking about his opponent ahead of the match on Centre Court, he said: “Well, he’s a player that have been improving unbelievable the last year. Was a good challenge in the French and I think he will be more, no? He’s a complete player with a lot of great things, and I need to keep going the way that I played today, no?

“Playing aggressive and playing with the right energy. Let’s see. He’s a tough opponent, but we are in fourth round. That’s the way that it should be.”

The latter is unable to oblige, though, with Nadal sending the game to deuce.

Van de Zandschulp goes on to overhit his first return before coming up short with a cheeky attempt at a drop shot, which strikes the net.

Van de Zandschulp mishits a shot at the net to give Nadal a major boost before going on to double-fault, handing two set points to the Spaniard.

A wayward flick down the line then gives the game to Nadal.

He’s not yet playing at his brilliant best but did more than enough to pip Van de Zandschulp over the course of the set.

Nadal is also serving impressively and manages to get the job done once again.

He is potentially a game away from going one set ahead if he is able to break Van de Zandschulp for the first time here.

Van de Zandschulp is finding plenty of joy on the serve and wraps up the eighth game of the first set with ease.

Could be we set for an early tiebreak?

The Dutchman manages to level up at 30-30 with a well-executed forehand down the line but fails to prevent his Spanish opponent from winning his fourth consecutive service game.

Nadal makes a couple of unforced errors but manages to take Van de Zandschulp to deuce for the second time in the match.

It’s the server who takes the game, though, by hitting another fiercely-struck ace that Nadal is unable to return.

Nadal responds perfectly by serving to love, with Van de Zandschulp’s final return going into the stands at Centre Court.

The 26-year-old finds himself just behind after five games but is playing quite well as things stand.

He smacks a well-hit ace down the middle to wrap up the game, leaving Nadal stranded.

Nadal manages to hold his serve but is being tested by Van de Zandschulp, who looks determined to give the 36-year-old a run for his money.

We could be in for a hugely exciting match here if the first three games are anything to go by!

Van de Zandschulp gives Nadal hope of breaking with a double-fault at 15-0 up.

The Spaniard goes on to draw level to 30-30 with a magnificent drop shot at the end of a long rally, sparking cheers from the Wimbledon crowd.

Deuce is ultimately required to separate the two players but it’s Van de Zandschulp who eventually comes out on top.

The Spaniard gets off to a near-perfect start on Centre Court, forcing Van de Zandschulp to overhit his return at game point.

Both players have stepped back up to the baseline and we’re just seconds away from the start of this match.

Players on the court

Rafael Nadal is greeted by huge cheers as he ventures onto the grass alongside Botic van de Zandschulp before the warm-ups get underway.

We’re just minutes away from the start of this match. Will Nadal be able to maintain his winning momentum on the famous turf at Centre Court?

The Spaniard managed to get through his first three matches with ease and will undoubtedly be looking to wrap up another comfortable victory over a lower-ranked opponent this evening.

However, there is every chance that Nadal could be firmly tested by Van de Zandschulp, who is in the world’s top 25 and has only dropped two sets at SW19 thus far.

The match is next up on Centre Court and will soon get underway after Simona Halep, who has just defeated Paula Badosa in straight sets, wraps up her on-court media duties.